7:30 PM
Princess Mononoke is a 1997 Japanese animated epic historical fantasy film written and directed by Hayao Miyazaki, animated by Studio Ghibli and produced by Toshio Suzuki. The term "Mononoke" is not a name, but a general term in the Japanese language for a spirit or monster; a closer rendering of the title into English would be "The Mononoke Princess" or "The Spirit Princess".

The film was first released in Japan on July 12, 1997, and in the United States on October 29, 1999. Princess Mononoke is a period drama set specifically in the late Muromachi period (approximately 1337 to 1573) of Japan but with numerous fantastical elements. The story concentrates on involvement of the outsider Ashitaka in the struggle between the supernatural guardians of a forest and the humans of the Iron Town who consume its resources. There can be no clear victory, and the hope is that the relationship between humans and nature can be cyclical.

Miramax Films, a subsidiary of The Walt Disney Company, purchased the film's distribution rights for North America. Miyazaki met with Harvey Weinstein, Miramax's chairman; Weinstein demanded that edits should be made to Princess Mononoke. In response, Toshio Suzuki sent Weinstein a katana with a message stating "No cuts." The English dub of Princess Mononoke is a translation with some adaptation by fantasy author Neil Gaiman, author of The Sandman.

The main changes from the Japanese version are to provide a cultural context for phrases and actions which those outside of Asia may not be familiar with. Such alterations include references to mythology and specific names for groups, such as Jibashiri and Shishigami, that appear in the Japanese version, which are changed to more general terms, such as Mercenary and Forest Spirit, in the English version. The rationale for such changes is that the majority of non-Japanese viewers would not understand the mythological references and that the English language simply has no words for the Jibashiri, Shishigami and other terms.

Miramax also chose to put a large sum of money into creating the English dub of Princess Mononoke with famous actors and actresses, yet when they released it in theatres there was little or no advertising and it was given a very limited run, showing in only a few theatres and for a very short time. Disney later complained about the fact that the movie did not do well at the box office. In September 2000, the film was announced for release on DVD in North America exclusively with the English dub. In response to fans' requests to add the Japanese track as well as threats of poor sales, Miramax hired translators for the Japanese version. This plan delayed the DVD release back by almost three months, but it sold well when it was finally released.

In Muromachi period Japan, an Emishi village is attacked by a demon. The last Emishi prince, Ashitaka, manages to kill the demon before it reaches the village, but not before its corruption curses his right arm. The curse gives him superhuman fighting ability, but will eventually kill him. The demon is revealed to be a boar god, Nago, corrupted by an iron ball lodged in his body. The village's wise woman (Oracle in the original dub) tells Ashitaka that he may find a cure in the western lands Nago came from.

Heading west, Ashitaka meets Jigo (Jiko-bō in the original dub), a wandering monk, who tells Ashitaka that he might find help from the Great Forest Spirit (Deer God), a Kirin-like creature by day and a giant Nightwalker by night. Nearby, a convoy returning to Irontown, led by Lady Eboshi, are attacked by a wolf clan led by the wolf-goddess Moro. Riding one of the wolves is San, a human girl. The next day, Ashitaka discovers two injured Irontown men, and sees San and the wolf clan; he greets them, but they ignore him and leave. He carries the injured through the forest, where he encounters many kodama, and glimpses the Forest Spirit.

In Irontown, Ashitaka learns Eboshi has built the town by clear-cutting forests to reclaim ironsand and produce iron, leading to conflict with the forest gods. The town is a refuge for social outcasts, including former brothel workers and lepers, whom Eboshi employs to manufacture firearms to defend against the gods. Ashitaka also learns Eboshi is responsible for turning Nago into the demon. Eboshi explains that San, whom she calls Princess Mononoke, was raised by the wolves as one of their own, and has a deep hatred for humankind.

Soon after, San infiltrates Irontown to kill Eboshi, but Ashitaka intervenes, knocking them both unconscious. As he leaves the town carrying San, he is shot by a villager, and falls unconscious while heading for the forest. San awakens and is about to kill the dying Ashitaka, but hesitates when he tells her she is beautiful. She takes him to the forest, and decides to trust him after the Forest Spirit saves his life.

Meanwhile, a large clan of boars, led by the blind boar-god Okkoto, attack Irontown to save the forest. Eboshi prepares for battle and sets out to kill the Forest Spirit. Jigo, revealed to be a mercenary, intends to give the god's head to the Emperor of Japan in return for protection from local daimyos. According to legend, the severed head of the Forest Spirit can grant immortality.

In the battle, Okkoto is corrupted by multiple gunshot wounds. Disguising themselves in boars' skins, Jigo's men trick the rampaging Okkoto into leading them to the Forest Spirit. San desperately tries to stop him, but is swept up in the corruption consuming his body. Ashitaka attempts to save her, but is also swallowed up into the corruption, until Moro attacks the fully corrupted Okkoto, and appeals to Ashitaka to use his love for San to save her, which he does. However, Ashitaka's infection is accelerated and San is also infected. Eboshi beheads the Forest Spirit during its transformation into the Nightwalker; corruption pours from its body, killing any living being it touches as it searches for its head, which Jigo has taken with him. Moro, dying from injuries sustained in the battle, uses the last of her strength to bite off Eboshi's right arm. After bandaging Eboshi and convincing San to help him get the Forest Spirit's head back, Ashitaka and her follow Jigo to Irontown, where they manage to return the god's head. Restored, the Forest Spirit falls into the lake, healing the land, and cures Ashitaka and San of the curse.

Though Ashitaka means much to San, she still hates humans for their actions and decides to remain in the forest. Ashitaka chooses to help rebuild Irontown, but tells San he will visit her in the forest. In gratitude to Ashitaka's efforts to save the people of Irontown, Eboshi vows to rebuild a better town and Jigo decides that he can't win against "fools." The film ends with a kodama appearing in the rejuvenated forest. 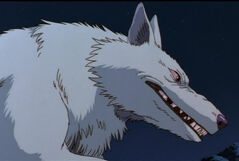 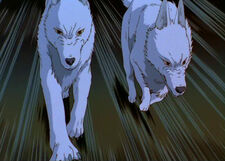 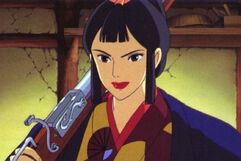 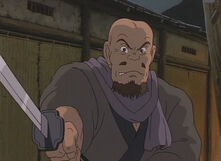 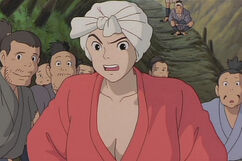 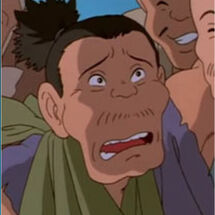 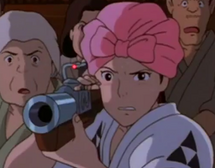 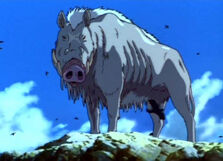 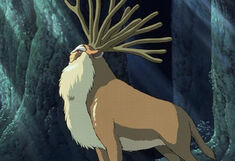 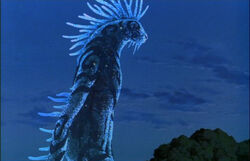 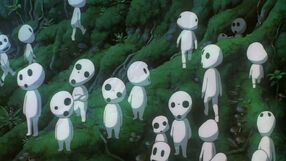 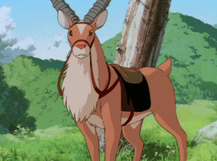 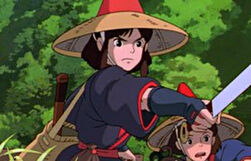 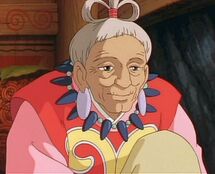 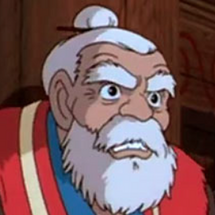