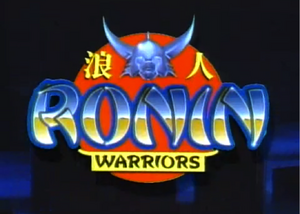 After defeating Talpa, the Ronin Warriors have gathered for a party, but Sage is missing. To their surprise, they soon see Sage’s armor on TV – killing people! The remaining warriors travel to New York in order to investigate the situation; but as they arrive they are attacked by not only an evil sorcerer, but the Armor of Halo as well. It is during this second attack that they realize their friend's armor is being controlled by the evil sorcerer, and they must now travel to Los Angeles to try to rescue Sage. There’s just one catch: the evil sorcerer wants their armor, too!

During an unusual heat wave, a strange silent warrior appears and starts attacking the city. This mysterious warrior is stronger than the Ronin Warriors, even though he seems to have no armor of his own. However, it is soon revealed that he wields a black copy of the mighty Inferno armor! Ryo and Sage are taken away to the mysterious warrior's homeland, and their friends chase after them; but once the battle has begun they discover that their true enemy is their very own armor. The decisions the Ronin Warriors make now may either save or destroy the entire world.

Just when the Ronin Warriors thought their days of fighting were over, a mysterious girl from the ancient past appears, bearing with her an ancient play that details the adventures of the Ronin Warriors long before they were even born. The armors were a cause of a terrible tragedy in her own time, and now it seems that she wants to destroy them. While the Ronin Warriors are trying to figure out if they have been nothing more than puppets of fate all of this time, the girl is kidnapping them one by one, using their greatest desires to lure them into her clutches.