October 23, 2004[2] - March 12, 2005
Rurouni Kenshin is a Japanese anime series based on the manga of the same name. The series is written by Nobuhiro Watsuki and directed by Kazuhiro Furuhashi. The series is comprised of 95 episodes spread across three seasons. It began airing on Japan's Fuji TV on January 10, 1996 and ended on September 8, 1998. It was produced by Aniplex and Fuji TV.

Two series of original video animations (OVAs) were also produced. The first, Rurouni Kenshin: Trust and Betrayal adapted stories from the manga that were not featured in the anime, while the second, Rurouni Kenshin: Reflection was a sequel to the manga.

Rurouni Kenshin was licensed by Media Blasters for North American distribution, with Bang Zoom! Entertainment providing the English dub. The series began airing in the U.S. on Cartoon Network's Toonami block on March 17, 2003[1], but after episode 48 aired on July 4, 2003 the series moved to Cartoon Network's Saturday Video Entertainment System block until the completion of the second season (episode 62), leaving the third season unaired in North America.

Rurouni Kenshin takes place during the early Meiji era in Japan, telling the story of a wanderer named Himura Kenshin, formerly known as the assassin "Hitokiri Battōsai". After participating in the Bakumatsu war, Kenshin wanders the countryside of Japan offering protection and aid to those in need as atonement for the murders he once committed as an assassin. When arriving in Tokyo in the 11th year of Meiji (1878), he meets a young woman named Kamiya Kaoru, who is in the middle of a fight with a murderer - who claims to be the Hitokiri Battōsai - tarnishing the name of the swordsmanship school that she teaches. Kenshin decides to help her and defeats the fake Battōsai. After discovering that Kenshin is the real Battōsai, Kaoru offers him a place to stay at her dojo noting that he is peace-loving and not cold-hearted, as his reputation implies. Kenshin accepts and begins to establish lifelong relationships with many people such as Sagara Sanosuke, a former Sekihō Army member; Myōjin Yahiko, an orphan from a samurai family; and a doctor named Takani Megumi. However, he also deals with his fair share of enemies, new and old, including the former leader from the Oniwabanshū, Shinomori Aoshi and his rival from the Bakumatsu Saitō Hajime.

Kenshin Himura — The main protagonist, Kenshin is a former legendary assassin known as "Battousai the Manslayer". At the end of the Bakumatsu, he becomes a wandering samurai, now wielding a "reverse-blade sword", a katana that has the cutting edge on the inwardly curved side of the sword, thus being nearly incapable of killing. Kenshin wanders the countryside of Japan offering protection and aid to those in need, as atonement for the murders he once committed as an assassin. In Tokyo, he meets a young woman named Kamiya Kaoru, who invites him to live in her dojo despite learning about Kenshin's past. Throughout the series, Kenshin begins to establish lifelong relationships with many people, including ex-enemies, while dealing with his fair share of enemies, new and old.

Kaoru Kamiya — The instructor of a kendo school in Tokyo called Kamiya Kasshin-ryū. All of it's students leave when a large number of people are killed by someone claiming to be the Battōsai from the Kamiya Kasshin-ryū", damaging her school's reputation. Kaoru is saved from this murderous impostor by the real Battōsai, Kenshin Himura, now a pacifist wanderer. Kaoru invites Kenshin to stay at her dojo as she notes that he is a gentle person. As the series continues, Kaoru develops strong romantic feelings for Kenshin, who is constantly haunted by his past deeds and believes he does not deserve happiness.

Yahiko Myojin — An orphan from a samurai family who was forced to work as a thief to repay the debt he had presumably owed, as his parents died before they could repay it. When he is rescued by Kenshin, he decides that he will grow up to be just like him. But because of his strong beliefs, Kenshin is no longer teaching the sword style he has learned. Therefore, Kenshin arranges for Yahiko to be trained by Kaoru, the teacher of the Kamiya Kasshin-ryū. As the series progresses, Yahiko becomes skilled at swordsmanship and faces many opponents.

Sanosuke Sagara — A former member of the Sekiho Army. When the group is destroyed by the Meiji Government, he becomes a fighter-for-hire to calm his anger by fighting. During his introduction in the series, he encounters the wanderer Kenshin Himura, who defeats him and is able to convince him to stop his mercenary work and instead start protecting people. After that encounter, Sanosuke becomes Kenshin's best friend as well as his partner in most of their fights.

Megumi Takani — Originally forced to make opium for an industrialist, with Kenshin and Sanosuke's support and encouragement, she becomes a doctor to atone for her past misdeeds. She enjoys flirting with Kenshin to make Kaoru jealous, but helps Kaoru come to terms with her feelings towards Kenshin. She is loyal to her friends and is always there to patch them up, especially Sanosuke, whom she often cautions about fighting. She is from the Aizu region, now Fukushima Prefecture.

Makimachi Misao — A kunoichi from Kyoto who was raised by the Oniwabanshū. She travels to Tokyo in search of Shinomori Aoshi whom she is in love with and meets Kenshin on her way back. Misao wishes to learn of what happened Aoshi in Tokyo and joins Kenshin on his way to Kyoto hoping to meet him again.

Hajime Saito — the former third squad captain of the Shinsengumi, a pro-shogunate force. During the Bakumatsu, he had a long time rivalry with Himura Kenshin, an assassin of the Imperialist cause. In the series, he is initially introduced as an antagonist who encounters and once again duels with Kenshin. It is later revealed that Saitō, who had only been testing Kenshin's strength, is now a spy agent working for the Meiji Government. After the reveal, Saitō becomes one of the main protagonists of the series, forming an uneasy alliance with Kenshin.

Shishio Makoto — A former Ishin Shishi hitokiri known within the ranks as the Battōsai's successor. But after his "comrades" in the government attempted and failed to assassinate him, Shishio Makoto spent the next decade slowly amassing power and developing an anti-government militia headed by his own private group of elite warriors - the Juppongatana. Shishio is the main antagonist of the Kyoto arc. 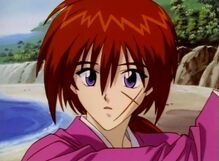 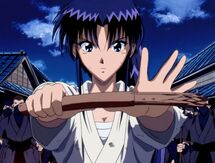 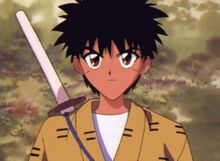 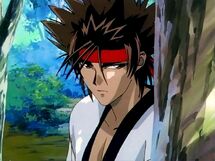 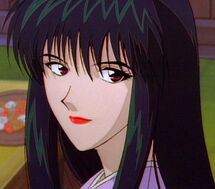 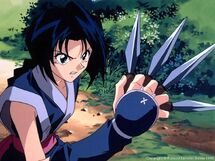 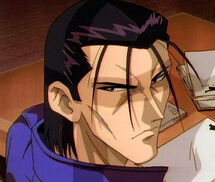 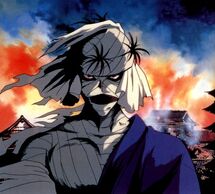 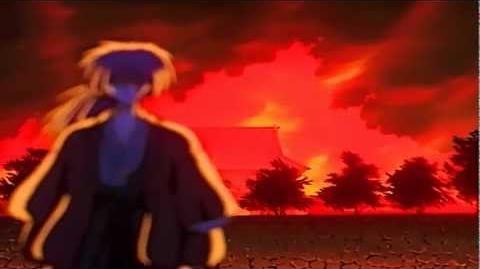 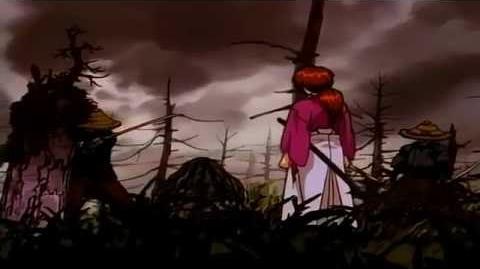 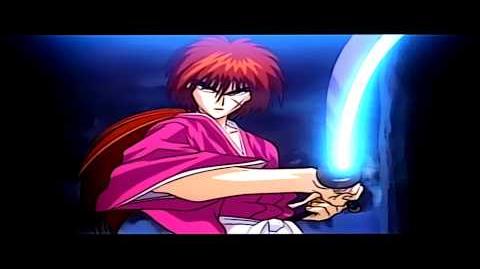 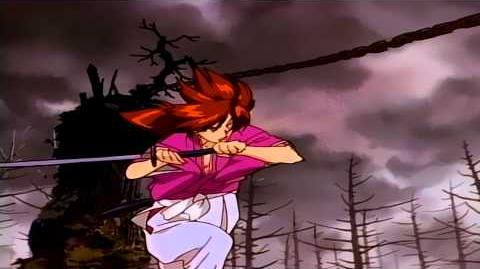 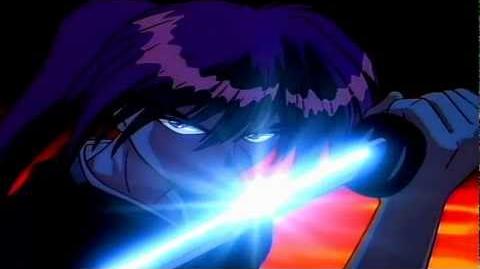 Rurouni Kenshin is a 95 episode Japanese anime series adapted from the manga series of the same name by Nobuhiro Watsuki. The series was directed by Kazuhiro Furuhashi and produced by Aniplex and Fuji TV,

The 27 episodes of season 1 are based on the first six volumes of the manga series. Situated during the early Meiji period in Japan, the story tells of a fictional assassin named Kenshin Himura, who becomes a wanderer to protect the people of Japan. The 35 episodes of season 2 are based on volumes 7-18 of the manga series, and depict the fight of the former assassin named Kenshin Himura, against his successor Makoto Shishio, who aims to conquer Japan. The 33 episodes of season 3 were not adapted from the manga. During that period, the "Jinchu Arc" of the manga was still being written and was still incomplete by the end of the anime fillers.

The series premiered in Japan on Fuji TV on January 10, 1996, and ran through September 8, 1998. The final episode, episode 95, did not air in Japan, but was a bonus episode for the VHS and DVD releases. The series was licensed for broadcast and home video release in North America by Media Blasters, who split it up into "seasons". These began airing on Cartoon Network's Toonami block on March 17, 2003, but after episode 48 aired on July 4, 2003 the series moved to Cartoon Network's Saturday Video Entertainment System block until the completion of the second season (episode 62), leaving the third season unaired in North America. The series returned to Toonami for a second run beginning on October 23, 2004 and ending on March 12, 2005.

Rurouni Kenshin only had one marathon appearance during its run on Toonami, Best of Kenshin, which aired from May 27-30, 2003.