52 (List of Episodes)
Superior Defender Gundam Force is a Japanese/American co-produced anime series, directed by Yūichi Abe. SD Gundam, as it was titled in North America, initially aired on Cartoon Network in the United States for 26 episodes, and later on TV Tokyo in Japan for 52 episodes. SD Gundam was the first Gundam series to air in North America before Japan.

Unlike previous SD Gundam series, SD stands for Superior Defender. It is a crossover series based on the three SD settings that were used in earlier SD Gundam anime and manga: SD Command Chronicles, a science-fiction-styled militaristic setting; Musha Gundam, a setting with samurai-themed robots; and Knight Gundam, a medieval European fantasy-themed setting. It also contains many references and homages to the standard Gundam shows, especially those of the Universal Century, Future Century, and After Colony timelines. In a sharp contrast to the dark nature of most of the other Gundam series, SD Gundam Force is extremely lighthearted, though it does at times get more serious as the series goes on, but it's never as dark as the more "traditional" Gundam series.

Despite being the longest-running Gundam series at the time, SD Gundam Force was the least-watched Gundam title in Japan, having averaged a 2.1% share of the viewing audience throughout its broadcast. It beat the previous record holder, After War Gundam X, which averaged at 2.8% during its run.[2]

SD Gundam was licensed in North America by Bandai Entertainment in 2003 and the series premiered on Cartoon Network's Toonami block on September 1, 2003, initially receiving respectable ratings.[1][3][4] However, only the first season of the series, spanning 26 episodes, was aired.

The story is set in the futuristic city of Neotopia, a happy peaceful place where humans and robots co-exist, until the Dark Axis, an evil force from another dimension, arrives. Aware of the Dark Axis in advance, Neotopia established the secret Super Dimensional Guard to combat the invaders while keeping the conflict a secret from the public. A young boy named Shute becomes accidentally involved in the first battle between the Dark Axis and the SDG's Gundam Force robot hero, Captain Gundam. Shute's friendship with Captain is critical to activating Captain's Soul Drive, his mysterious power source that is the key to victory. As the fighting continues, Gundams from other dimensions such as Zero and Bakunetsumaru arrive to join the battle as allies. As the Gundam Force beat back the mono-eyed invaders the battle spreads beyond Neotopia into the dimensions of Lacroa and Ark, leading into a final confrontation with the supreme leader of the Dark Axis - General Zeong.

Shute — A young boy who lives in Neotopia, Shute accidentally becomes involved in the secret war against the Dark Axis when their initial invasion attempt occurs right before his eyes. Shute is saved by Captain Gundam and, despite some initial objections from the SDG for the boy's safety, the two become fast friends and partners. It is this friendship which enables Shute to activate the Soul Drive, the mysterious core of Captain Gundam. Shute was made an honorary member of the SDG after he saved Captain and Zero from the Magna Musai. During the Gundam Force's mission to liberate Lacroa and Ark, Shute receives a backpack with boosters and a glue shooter, both modeled to look like parts of Captain's weaponry (his original booster pack and unactivated beam saber).

Captain Gundam — The first unit produced by the Super Dimensional Guard's top secret Gundam Force program, Captain Gundam is the main defender of Neotopia. Initially secretive and rigid, Captain loosens up and becomes more human via his interactions with Shute. The core of Captain Gundam is his Soul Drive, a mysterious power source which responds to emotions of others. When cheered on by Shute, Captain can use the Soul Drive to unleash his lethal Captain Punch fist attack. While Captain's standard form keeps weapons to a minimum (vulcans, missile launchers, beam saber and an optional light beam rifle and light shield), he is designed to be adaptable for various missions.

Zero the Winged Knight — A Knight Gundam sworn to protect Lacroa and its royal family, Zero was spirited away to Neotopia two years ago in the hopes he would find a way to combat the Dark Axis occupation. He ultimately hooked up with Neotopia's own Gundam defenders when the Dark Axis launched a campaign there. Flamboyant and noble, Zero sees himself as something of a gentleman and has an ego to match. He's also a sucker for women, especially damsels in distress. Like all Lacroan natives, Zero has access to a degree of magical powers which he casts with his powerful Buster Sword. He's displayed the ability to create barriers of energy, flying slashes of energy, and his signature attack, Super Magical Violet Tornado that consists of firing a gust of wind. Out of combat, he often produces magical flowers to annoy his team mate Bakunetsumaru, usually on the tip of his swords. Zero is an important figure in Lacroan mythology, which regards him as the 'Chosen One' who will save Lacroa. He is based on the XXXG-01W Wing Gundam.

Bakunetsumaru — The Blazing Samurai of Ark, Bakunetsumaru is dedicated to protecting his homeland from both the forces of Kibaomaru and the Dark Axis. After being accidentally flung to Neotopia and seeing that the war is spilling even further into other dimensions, he swears to fight to protect his new home but remains vocal about his desperation to return to Ark. Bakunetsumaru's name is often a source of comedy, as those not native to Ark often forget how to say it. As a result, he is usually referred to as 'Baku' by his new friends. Baku fights with twin swords, at least one of which was given to him by the master who trained him. Using these, he can perform his destructive signature attack, the Bakunetsu Tenkyoken, which is a giant, flaming X-shaped blast. Bakunetsumaru also harbors a fear of ghosts and cannot swim. His design is a Musha-style GF13-017NJ Shining Gundam.

Entengo — Bakunetsumaru's steed. The only connection Baku has to his homeland while in his Neotopian exile, Entengo is always by his master's side. He stays in Neotopia while the Gundam Force head out to save Lacroa but is quickly sent on when the Gundams reach Ark, where he stays by his master's side once again until the end of the war. Based on Master Asia's (and eventually Domon's) horse, Fuun Saiki, from G Gundam. 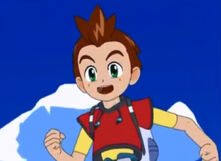 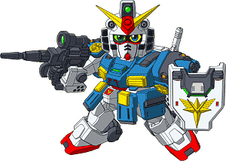 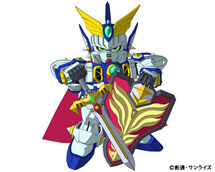 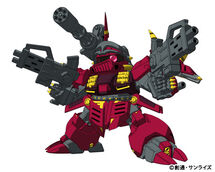 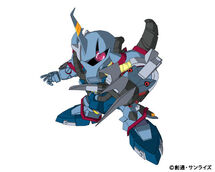 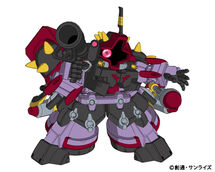 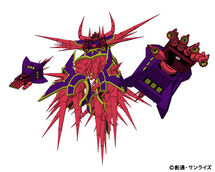 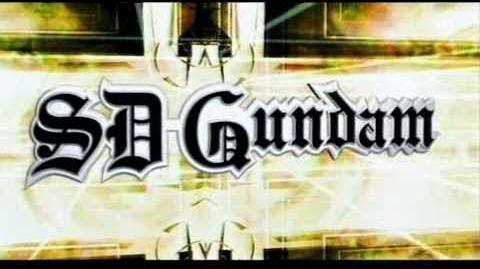 SD Gundam was the first Japanese anime to never have VHS releases, as all of its home video releases were only available on DVD, with each DVD having 3 episodes each. Though the final 26 episodes were left unaired on television in America, fans petitioned for the second half to be released, and in 2008 the last 26 episodes were released in an English-dubbed DVD set.

SD Gundam initially premiered on Cartoon Network's Toonami block in the United States, for 26 episodes, from September 1, 2003 to October 6, 2003. Even though poor ratings prevented the second season from airing on Toonami, the first season continued to air on the block until March 5, 2004.