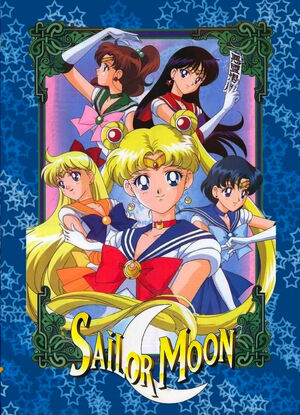 The first season of the Sailor Moon anime series, titled Pretty Soldier Sailor Moon, was produced by Toei Animation and directed by Junichi Sato. It began broadcasting in Japan on TV Asahi on March 7, 1992 and ended on February 27, 1993, lasting 46 episodes. The first season was produced concurrently with the first story arc (Dark Kingdom) of the manga by Naoko Takeuchi. It follows the manga story closely, and although neither series was expected to continue after its initial story arc, both were very successful and their runs were extended.

The first season episodes were among those released in North America by DIC Entertainment, with an English dub produced by them and Optimum Productions. Five episodes were omitted from the English dub for inappropriate content and two were forged into one, which makes a total of forty episodes. Many of the remaining episodes were heavily edited, making such changes as renaming place names to sound American, editing Japanese text off buildings and replacing it with English text, mirror-imaging frames that involved traffic, and cutting minor things such as slaps or drink-spitting. Each episode concluded with an educational segment, "Sailor Says," in order to teach a moral based on the story that had just been shown. These changes were met with great controversy amongst Sailor Moon purists.

This arc introduces most of the major protagonists: Serena Tsukino, Darien Chiba, Amy Mizuno, Raye Hino, Lita Kino, and Mina Aino. Its plot line involves the awakening of the Sailor Scouts—teenage super heroines—and their fight against the Negaverse and its leader, Queen Beryl. As the Scouts battle for the fate of the world, they learn about a previous life where they had all lived together in a kingdom on the Moon.

The second season of the Sailor Moon anime series, titled Pretty Soldier Sailor Moon R, was produced by Toei Animation and directed by Junichi Sato and Kunihiko Ikuhara. The season began broadcasting on TV Asahi between March 6, 1993 and ended on March 12, 1994, lasting 43 episodes.

Production for this season took place concurrently with that of the second story-arc (Black Moon) of the manga by Naoko Takeuchi, closely following the story of the manga. Sailor Moon was originally intended by Takeuchi to run only one season, but the first became so popular that Toei asked Takeuchi to keep drawing her manga. At first, she struggled with developing another storyline to extend the series due to the sudden request of Toei Animation. The basic idea of the second season, introducing the daughter of Usagi Tsukino/Sailor Moon from the future, came from her editor, Fumio Osano.

Because the production of both manga and anime occurred at the same time, Sailor Moon R begins with a 13 episode long sub-arc that does not exist in the manga, created to give Naoko Takeuchi time to catch up. This story features the Sailor Scouts regaining their memories, which they lost after defeating the Negaverse when they were revived, and encounter the Makaiju aliens. This first arc is known as the 'Makaiju' arc ('Doom Tree' in the English dub by DiC Entertainment). The main story arc, which is featured in the manga, explores the future of all the Scouts in a city made of crystal called Crystal Tokyo, ruled over by Neo-Queen Serenity and King Endymion. New characters were introduced including Rini and Sailor Pluto. The Black Moon Clan, led by Prince Demando and his advisor, the Wiseman, function as the primary villains.

The English dub, produced by DiC Entertainment, included an educational segment called "Sailor Says", at the end of each episode — to teach a moral based on the story shown in the episode. In its first airing, the English Sailor Moon series consisted of just 65 episodes, 40 of them taken from the first season. The company eventually produced 82 episodes, completing the first and second season. The first 12 completed episodes of the Chibiusa/Black Moon arc were shown first after airing the Makaiju Arc. The remaining 17 episodes of the Black Moon arc were not released for another three years, labeled by Toonami as "the lost episodes". There was a campaign called 'SOS' which means 'Save Our Sailors' organized by many American Sailor Moon fans. Many fans signed a petition asking DiC Entertainment to continue their effort to release the final episodes. Many poptarts were sold as a result of the campaign to raise money, but it was General Mills who ultimately agreed to sponsor and syndicate the show through The Program Exchange. When the remaining 17 episodes were finally released it allowed for Pioneer to get access to the Sailor Moon copyrights to dub the third and fourth season, Sailor Moon S and Sailor Moon Super S.

One of the episodes from the second season, about Serena, Raye, Mina, Lita and Amy relaxing on an island during their holidays involving Rini's friendship with a dinosaur (episode 67 Japanese version), was not dubbed by DiC and was never shown in the English dub.

The third season was produced concurrently with the third story arc (Mugen, meaning "Infinity") of the manga by Naoko Takeuchi, closely following the story of the manga. Sailor Moon S introduces three new Sailor Scouts: Sailors Uranus, Neptune, and Saturn. It also reintroduces the character of Sailor Pluto and gives her a civilian identity, Setsuna Meioh. In the anime, Rini is seen for the first time in her capacity as Sailor Mini Moon. The series antagonists are the Heart Snatchers, led by Germatoid-possessed Professor Souichi Tomoe and the Witches 5.

This season was not dubbed into English until 2000, three years after the last episodes of the previous series, Sailor Moon R. By this time, the license had been transferred from DiC and General Mills to Cloverway Inc., who did not cut any episodes, although they did edit the ones they produced for television and edited VHS releases (the later DVD and uncut VHS releases of these episodes were uncut and bilingual). The English dub produced by them and Optimum Productions used mostly the same voice actors from the previous seasons, however, several major characters were recast with new voice actors. The educational "Sailor Says" conclusions were not continued, and the dubbed episode numbers were adjusted by the YTV to match those of the original Japanese version. Because of this, episode numbers 83-89 were never used in that broadcast.

One of the controversies surrounding Sailor Moon S is in the romantic-lesbian relationship of Sailor Uranus and Sailor Neptune, who are subtly depicted as romantic lovers, although this is never mentioned directly. Takeuchi has openly admitted they are a romantic couple, and their voice actresses were instructed to play the characters "as if they are a married romantic couple." However, because of differing cultural standards, most countries outside of Japan have censored the relationship. Most notably, in the English-dubbed version this subtext is removed, and instead they are stated to be "cousins".

The episode "Goodness Eclipsed" was temporarily skipped during the English dub's original airing on Cartoon Network's Toonami block due to inappropriate content.

This season was produced concurrently with the manga's fourth story arc, Dream, by Naoko Takeuchi. Because of the series popularity, Toei Animation started adapting SuperS into an anime before it was finished. As a result, there are significant differences in the thematic tone between the two. Unlike the darker-themed manga, the anime is characterized by a more child-like atmosphere and the absence of the four Outer Scouts (Sailor Uranus, Sailor Neptune, Sailor Pluto and Sailor Saturn).

This season was dubbed into English in 2000 by Cloverway Inc. and Optimum Productions. Two characters had their genders swapped: Fisheye was changed from male to female, while Zirconia, considered a monstrously hideous creature, was changed from a female into a male. SuperS was dubbed using the same voice actors as the previous season. It was broadcast edited on Cartoon Network's programming block Toonami, and was respectively released to VHS edited and to DVD unedited.

Not included in the English dub was a television special that originally aired between episodes 131 and 132 in Japan. The special, which ran for an hour, consisted of three self-contained mini-episodes which told side stories independent of the continuing plot of the SuperS series proper.

The fifth season of the Sailor Moon anime series, titled Pretty Soldier Sailor Moon: Sailor Stars, was produced by Toei Animation and directed by Takuya Igarashi. The season began broadcasting on TV Asahi on March 9, 1996 and ended on February 8, 1997. This season of Sailor Moon has not been dubbed into English.

Sailor Stars divides into two story arcs. The first arc, relatively short, consists of six episodes which re-introduce the previous season's villain, Queen Nehellenia, as well as the four Outer Scouts, who meet her for the first time (they did not appear during the fourth season). Sailor Pluto's arrival, together with Sailor Saturn, meant that a new and more powerful enemy is approaching the Solar System who has distorted the timeline already as Sailor Pluto explained to the Inner Scout group. These episodes originated as filler to allow Takeuchi time to begin her new story-arc; afterward the season follows the manga.

The second arc is relatively long, and is the basis of the Sailor Stars theme which focuses mainly on this new unknown enemy's eventual arrival on Earth. Its plot branches out to introduce new characters and even new Sailor Scouts from other planets, including the Sailor Starlights, Princess Kakyuu, and Chibi Chibi. As in the manga, Rini returns to her own time after the final battle with Nehellenia, but does not participate in the climatic events of this story arc.

This season focuses on the arrival of three new Sailor Scouts - the Sailor Starlights, three women who physically change their bodies into young men as their everyday disguise and form a boy band called the Three Lights. The Sailor Starlights narrowly escaped a threat from their own solar system, and they have come to Earth to search for their princess, who was separated from them when they escaped their planet. They use their music as the Three Lights to call out to her so that she can help them fight back against the enemy who threatened their own system. Meanwhile, new evil sailor scouts show up to threaten Sailor Moon and her protectors. The Sailor Starlights fight against these new scouts; although they initially refuse to partner with Sailor Moon and the Earth scouts, they eventually fight with them side by side.

The main threat turns out to be Sailor Galaxia, queen of an organization called "Shadow Galactica" and herself a powerful former Sailor Scout - the most powerful Sailor Scout of the whole galaxy. Sailor Galaxia is forced to rule the galaxy by the evil within herself. By collecting "true star seeds" from Sailor Scouts throughout the galaxy, her powers increase. However, Sailor Galaxia knows within herself the fate which awaits her upon meeting the receiver of the Light of Hope, the light ray which she sent before she became corrupted by Chaos, and so subconsciously seeks her in order to rid herself of the evil within herself.