51 (List of Episodes)
Soul Eater is a 51-episode Japanese anime adaptation of the Soul Eater manga written by Atsushi Ōkubo. The anime series was directed by Takuya Igarashi and produced by Bones, Aniplex, Dentsu, Media Factory, and TV Tokyo. In 2008, the series was licensed in North America by FUNimation Entertainment who also created an English dub for the series.[3][4]

Soul Eater made its North American television debut when it began airing on the Funimation Channel on September 6, 2010. The series aired on Adult Swim's Toonami block from February 16, 2013[1] to March 15, 2014.[2] The series was rated TV-PG-LSV and TV-14-DLSV on Adult Swim.

Soul Eater is set at Death Weapon Meister Academy located in the fictional Death City in Nevada, United States. The school is run by Death, as a training facility for humans with the ability to transform into weapons, as well as the wielders of those weapons, called "Meisters". Attending this school are meister Maka Albarn and her scythe partner Soul Eater; ninja Black Star and his partner Tsubaki Nakatsukasa, who can turn into a variety of different weapons such as a kusarigama, shuriken, and ninjatō; and Death's son Death the Kid and his pistol partners Liz and Patty Thompson. The goal of the school's meister students is to have their weapons defeat and absorb the souls of 99 evil humans and one witch, which will dramatically increase the power of the given weapon and turn them into "death scythes", weapons capable of being used by Death.

Maka Albarn — Maka is a young but dedicated student who takes after her mother, another prodigious meister. However, her relationship with her father, Spirit, is strained due to his constant flirtations with women, leading her parents to divorce. As such, Maka is obsessed with turning her weapon partner, Soul Eater, into a death scythe that will surpass her father. She collaborates well with Soul in battle, but is prone to nagging and violent outbursts whenever Soul does something foolish. When in danger, however, Maka does everything she can to keep Soul out of harm's way. In the anime adaptation, Maka is shown to have demon weapon powers inherited from her father and mother, allowing her to conjure blades from her body while she is unconscious, while in the manga, Maka can fully synchronize with Spirit due to their bond as father and daughter.

Soul Evans — Better known as Soul Eater, is a demon scythe and the partner of Maka Albarn. His weapon form is a scythe which has a red and black blade and an eye near its heel which expresses his emotions. He has a laid-back and nonchalant personality and tries to maintain a "cool" attitude, but often ends up embarrassing himself instead. He tends to bicker with Maka over unimportant things from time to time, but is fiercely loyal to her and has more than once displayed his will to die for his friends' safety. As a member of a renowned family of musicians, Soul is a talented pianist, but used his discovery of his weapon powers as an excuse to break ties from the family tradition and pursue the goal of becoming the most powerful death scythe ever. He dislikes being compared to his older brother Wes, a famous violinist, and is often reluctant to play music for other people. He can use this talent when resonating his soul wavelength with others, playing the piano within his soul to drastically enhance their power.

Black Star — Stylized as "Black☆Star", is a ninja assassin and the meister of Tsubaki. He is exceedingly arrogant and loud-mouthed for an assassin, preferring to make a flashy entrance rather than sneaking up on his opponents, and tries to upstage anyone who gains more attention than he does. He frequently calls himself a "big" man destined to surpass God, thus driving himself to his physical limits and making him one of the most athletic students at DWMA. He is a skilled combatant even when unarmed, using a skill that allows him to increase his own soul wavelength and channel it through physical attacks. He is one of the last remaining survivors of the Star Clan, a family of ninja assassins who slaughtered others for wealth until they were wiped out by DWMA, which took him in as an infant. He is oppressed by anyone who recognizes the clan's symbol, a star-shaped tattoo on his shoulder. Due to his obsession with power, some believe he will eventually descend down the path towards becoming a kishin like his father.

Tsubaki Nakatsukasa — The weapon partner of Black Star, classified as a "shadow weapon" who has the power to transform into a variety of ninja weapons including a kusarigama, a shuriken, a ninjatō, and a smoke bomb. She is gentle, quiet, friendly, and easygoing, and provides a soothing influence among her friends whenever they argue. She is also very patient and tolerant of others, which allows her to put up with Black Star's constant arrogance and showboating, and serves as a highly collaborative partner in battle. Her multiple weapon forms are part of a tradition passed down by her family, descended from the first demon weapons created by Arachne.

Death the Kid — The meister of the Thompson sisters, the younger brother of Asura and the son of Death, born as an extension of Death's being and given his own personality. His status as a grim reaper grants him formidable godlike powers such as virtual invincibility. However, he suffers from a severe obsessive-compulsive disorder for symmetry, he views anything perfectly balanced on the right and left to be beautiful, and breaks down upon seeing anything off even by the slightest measurement, which hinders him in his daily life and in battle. He wields the Thompson sisters simultaneously and upside-down to preserve his personal symmetry, and refuses to fight using one while the other is missing. He can also summon a flying skateboard called Beelzebub as both transportation and a weapon.

Because he is already a polished meister and a grim reaper, he is not required to collect souls or attend DWMA, but he does so anyway to create a custom weapon suited to his desires. His most distinguishing feature is the set of three white streaks on the left side of his head called the Lines of Sanzu, which increase his godlike powers for every line that fully wraps around his head, though it depresses him whenever someone mentions them as they are asymmetrical. It is hinted that when all three lines become properly connected, Death The Kid shall fully mature as a grim reaper, but his father's life shall come to end, which was hinted by Excalibur and the fact that each time one of Kid's lines are connected, cracks appear in Death's mask.

Liz & Patty Thompson — Elizabeth Thompson and her younger sister Patricia Thompson, better known as Liz and Patty, respectively—are the weapon partners of Death the Kid. They both take the form of semi-automatic pistols and compress Kid's soul wavelength and fire it in the form of energy bullets that range in strength from destructive blasts to painful yet non-wound-inducing shots. Both sisters are able to wield the other in their weapon form whenever Kid is absent. As infants, they were abandoned on the streets of Brooklyn and survived by mugging passersby. They originally joined Kid to exploit his wealth and authority as a grim reaper, but grew closer to Kid over time and outgrew their greed. Liz is a cynical young woman who always finds Kid's perfectionist attitude annoying, but is also very cowardly and has a fear of ghosts. Patty is an extremely childish girl who is able to maintain a cheerful attitude in any situation, but usually has bouts of psychotic rage to motivate her partners.

Death — Also called the Grim Reaper, is one of the most powerful beings in the series. Death is the personification of madness through order, reflected by his desire to maintain peace in the world and his aversion towards chaos. Death is also the former leader of the Great Old Ones prior to sealing away his apprentice and first child Asura eight centuries ago when he became a kishin, binding his own soul around Death City to keep him imprisoned underground. Unable to leave the city as a result, Death created the Death Weapon Meister Academy to train meisters and weapons to prevent more kishin from surfacing, and to create death scythes to help him maintain the peace. As headmaster, Death normally resides in a special chamber in DWMA building called the Death Room, which others can contact through mirrors and reflective objects.

While more menacing in his earlier days, Death altered his appearance into a more cartoonish form and acting eccentric to appease his younger students who were frightened of his true form. But some aspects of his actual form remain like his large white hands that now resemble foam hands which he uses to perform a karate chop as a form of discipline for those who act out of hand. As a Grim Reaper, Death's prefers scythe type weapons and made Spirit, Maka's father, into his primary death scythe. Death is gradually weakening as Kid's Lines of Sanzu begin to connect overtime. Death accepts his fate, knowing he will die once the Lines of Sanzu are all connected. 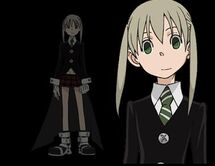 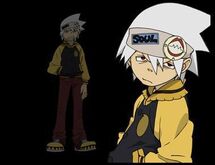 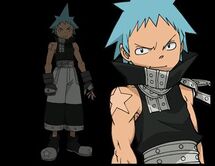 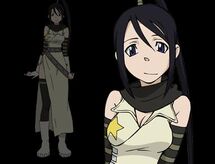 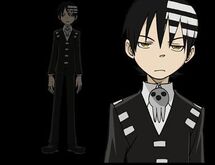 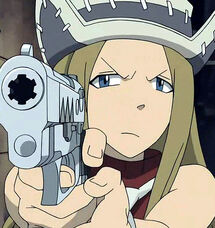 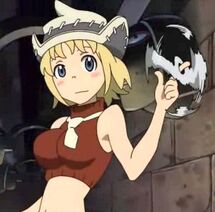 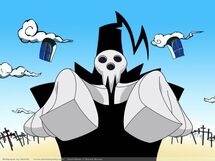 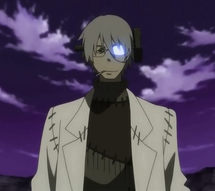 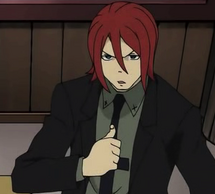 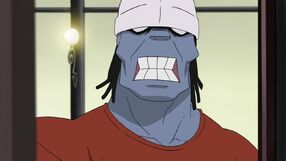 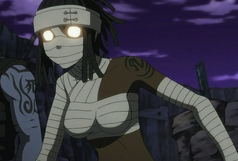 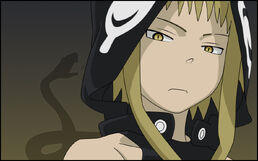 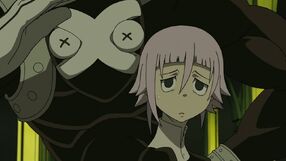 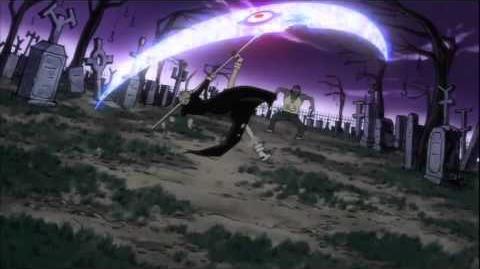