7:00 PM
Spider-Man is a 2002 American superhero film directed by Sam Raimi. Based on the Marvel Comics character of the same name, the film stars Tobey Maguire as Peter Parker, a high-school student who turns to crimefighting after developing spider-like powers. Spider-Man also stars Willem Dafoe as Norman Osborn (a.k.a. the Green Goblin), Kirsten Dunst as Peter's love interest Mary Jane Watson, and James Franco as his best friend Harry Osborn.

Filming of Spider-Man took place in Los Angeles, and New York City from January 8 to June 30, 2001. Spider-Man was released on May 3, 2002, and became a critical and financial success. With $821.7 million worldwide, it was 2002's third highest-grossing film. Reviews were largely positive with critics praising the film in several aspects. Spider-Man was, for its time, the only film to reach $100 million in its first weekend, had the largest opening weekend gross of all time, and was the most successful film based on a comic book. At the 75th Academy Awards ceremony, it was nominated for Best Visual Effects and Best Sound Mixing. It also has two sequels, Spider-Man 2 and Spider-Man 3, as well as a crossover with the Marvel Cinematic Universe film Spider-Man: No Way Home.

The movie premiered on Cartoon Network's Toonami block on April 28, 2007, at 7:00 PM. The movie aired with a TV-PG-LV rating and was minimally edited for content.[1] A sneak preview for Spider-Man 3 was shown before the movie. Spider-Man is one of only two live-action films to air on the Toonami block, the other being Batman.

High-school senior Peter Parker (Tobey Maguire) visits a genetics laboratory with his class, which includes his friend Harry Osborn (James Franco) and love interest, Mary Jane Watson (Kirsten Dunst). There, Peter is bitten on the hand by a genetically engineered "super spider". Shortly after arriving home to his Aunt May (Rosemary Harris) and Uncle Ben (Cliff Robertson), he is rendered unconscious. Meanwhile, Harry's father, scientist Norman Osborn (Willem Dafoe), owner of Oscorp, is attempting to preserve his company's critically important military contract. He experiments on himself with a new but unstable performance-enhancing chemical vapor that increases his speed, strength, and stamina. However, it also drives him insane and he kills his assistant, Mendel Stromm.

The next morning, Peter finds that his previously impaired vision has improved and that his body has transformed into a more muscular physique. At school, he finds his body producing webbing and that his quickened reflexes let him avoid injury during a confrontation with bully Flash Thompson (Joe Manganiello). Peter discovers he has developed superhuman speed, strength, the ability to stick to surfaces, and a heightened ability to sense danger. Brushing off Uncle Ben's advice that "With great power comes great responsibility," Peter enters a wrestling tournament to get money to buy a car to impress Mary Jane. He wins his match, but the promoter cheats him out of the contest money and when a thief raids the tournament, Peter indifferently observes. He later discovers his Uncle Ben has been carjacked and killed. Peter confronts the carjacker only to realize it was the same thief he let get away.

After Peter disarms him, the fleeing carjacker falls out a window and dies. Meanwhile, Norman Osborn kills several scientists and the military's General Slocum. Upon graduating highschool, Peter begins using his abilities to fight injustice, donning a costume and the persona of Spider-Man. Newspaper editor J. Jonah Jameson (J.K. Simmons) hires Peter as a freelance photographer, since he is the only person providing clear images of Spider-Man. Norman, upon learning Oscorp's board members plan to sell the company, assassinates them at the World Unity Fair. Jameson quickly dubs the mysterious killer the Green Goblin. The Goblin offers Spider-Man a place at his side, but Spider-Man refuses. At the Osborn and Parkers' Thanksgiving dinner, Norman, unknown to Peter, deduces Spider-Man's true identity when he sees an injury caused by the Goblin on Peter; the Green Goblin subsequently attacks and hospitalizes Aunt May.

Norman begs for forgiveness, but his Goblin persona attempts to remote-control his glider to kill Spider-Man. Spiderman avoids the attack, causing the glider to impale Norman instead, leaving him mortally wounded, and he dies after asking Peter not to tell Harry about the Green Goblin. Spider-Man takes Norman's body back to Norman's house and hides the Green Goblin's equipment. At Norman’s funeral, Harry swears vengeance toward Spider-Man, believing him responsible for killing his father, and asserts that Peter is all he has left. Mary Jane confesses to Peter she is in love with him, but Peter, feeling that he must protect her from the unwanted attentions of Spider-Man's enemies, hides his true feelings and tells her that they can only be friends. As Peter leaves the funeral, he recalls Ben's words about responsibility, and accepts his new life as Spider-Man. 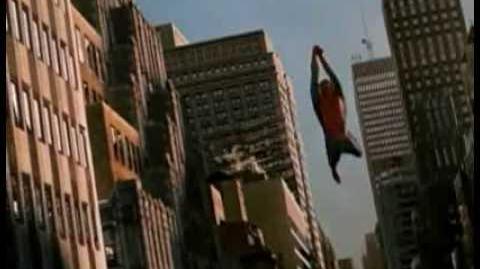