6:45 PM
Spirited Away is a 2001 Japanese animated fantasy film written and directed by Hayao Miyazaki and produced by Studio Ghibli. The film tells the story of Chihiro Ogino, a sullen ten-year-old girl who, while moving to a new neighborhood, enters an alternate reality inhabited by spirits and monsters. After her parents are transformed into pigs by the witch Yubaba, Chihiro takes a job working in Yubaba's bathhouse to find a way to free herself and her parents and escape to the human world.

Miyazaki wrote the script after he decided the film would be based on his friend's ten-year-old daughter, who came to visit his house each summer. At the time, Miyazaki was developing two personal projects, but they were rejected. With a budget of US$15 million, production of Spirited Away began in 2000. During production, Miyazaki realized the film would be over three hours and decided to cut out several parts of the story.

Pixar director John Lasseter, a fan of Miyazaki, was approached by Walt Disney Pictures to supervise an English-language translation for the film's North American release. Lasseter hired Kirk Wise as director and Donald W. Ernst as producer of the adaptation. Screenwriters Cindy Davis Hewitt and Donald H. Hewitt wrote the English-language dialogue, which they wrote to match the characters' original Japanese-language lip movements.

Spirited Away was released on July 20, 2001, and became the most successful film in Japanese history, grossing over $274 million worldwide. The film overtook Titanic (at the time the top grossing film worldwide) in the Japanese box office to become the highest-grossing film in Japanese history with a $229,607,878 total. Acclaimed by international critics, the movie was considered one of the best films of the 2000s decade and one of the greatest animated films of all time. It won the Academy Award for Best Animated Feature at the 75th Academy Awards.

In North America, the film was released on DVD and VHS formats by Buena Vista Home Entertainment on April 15, 2003. The attention brought by the Oscar win resulted in the film becoming a strong seller. The bonus features include Japanese trailers, a making-of documentary which originally aired on Nippon Television, interviews with the North American voice actors, a select storyboard-to-scene comparison and The Art of Spirited Away, a documentary narrated by actor Jason Marsden.

Ten-year-old Chihiro Ogino and her parents are traveling to their new home when her father takes a wrong turn. The family enters a magical world and her father insists on exploring and they cross a dry riverbed. While Chihiro's parents eat at an empty restaurant stall, Chihiro finds an exquisite bathhouse. She meets a young boy, Haku, who warns her to return across the river before sunset. However, Chihiro discovers too late that her parents have turned into pigs and she is unable to cross the flooded river, becoming trapped in the spirit world.

After finding Chihiro, Haku has her ask for a job from the bathhouse's boiler-man, Kamajii, a spider yōkai commanding the susuwatari. Kamajii and the worker Lin sends Chihiro to the witch Yubaba, who runs the bathhouse. Yubaba gives Chihiro a job but renames her Sen. While visiting her parents' pigpen, Sen finds a goodbye card addressed to Chihiro and realizes that she has already forgotten her name. Haku warns her that Yubaba controls people by taking their names and that if she forgets hers like he has forgotten his, she will not be able to leave the spirit world. While working, Sen invites a silent masked creature named No-Face inside, believing him to be a customer. A 'putrid spirit' arrives and is Sen's first customer. She discovers he is the spirit of a polluted river. In gratitude for cleaning him, he gives Sen a magic emetic dumpling. Meanwhile No-Face tempts a worker with gold, then swallows him. He demands food and begins tipping extensively. As the workers swarm him hoping to be tipped, he swallows yet another two greedy workers.

Sen discovers paper shikigami attacking a dragon and recognizes the dragon as Haku transformed. When a grievously-injured Haku crashes into Yubaba's penthouse, Sen follows him upstairs. When she reaches Haku, a shikigami that stowed away on her back transforms into Zeniba, Yubaba's twin sister. She transforms Yubaba's baby son Boh into a mouse, creates a decoy baby and turns Yubaba's bird creature into a tiny bee. Zeniba tells Sen that Haku has stolen a magic gold seal from her, and warns Sen that it carries a deadly curse. After Haku dives to the boiler room with Sen and Boh on his back, she feeds him part of the dumpling, causing him to vomit both the seal and a black slug, which Sen crushes under-foot.

With Haku unconscious, Sen resolves to return the seal and apologize for Haku. Before she leaves the bathhouse, Sen confronts No-Face, who is now massive, and feeds him the rest of the dumpling. Vomiting, No-Face chases Sen out of the bathhouse before returning to his normal size. Sen, No-Face and Boh travel to see Zeniba. Enraged at the damage caused by No-Face, Yubaba blames Sen for inviting him in and orders that her parents be slaughtered. After Haku reveals that Boh is missing, Yubaba promises to free Sen and her parents in exchange for Haku retrieving Boh and testing Sen's sincerity one final time.

Sen, No-Face and Boh arrive at Zeniba's house. Zeniba, now the benevolent "Granny," reveals that Sen's love for Haku broke her curse, and that Yubaba had used the black slug to control Haku. Haku appears in his dragon form and flies both Sen and Boh back to the bathhouse. No-Face unexpectedly shows itself as a very good spinner for Zeniba and accepts her proposal to stay as a worker.

On the way back, Sen recalls a memory from her youth in which she had fallen into the Kohaku River but was washed safely ashore. After correctly guessing that Haku is the spirit of the Kohaku River (and thus revealing his real name), Haku is completely freed from Yubaba's control. When they arrive at the bathhouse, Yubaba tells Sen that in order to break the curse on her parents, she must identify them from among a group of pigs. After Sen correctly states that none of the pigs are her parents, Sen is given back her real name Chihiro. Haku takes Chihiro to the now dry riverbed and vows to meet her again. Chihiro crosses the river and reunites with her restored parents, who do not remember what happened. They walk back to their car and drive off. 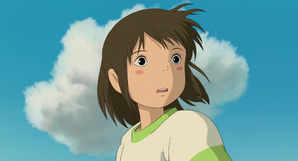 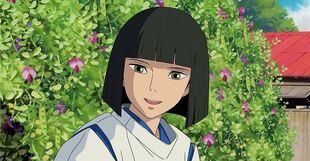 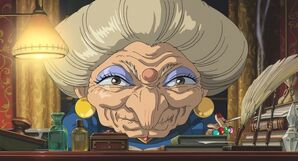 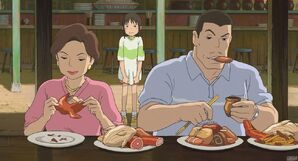 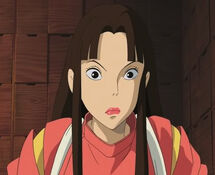 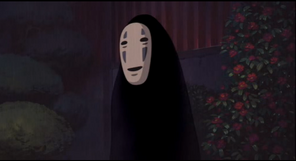 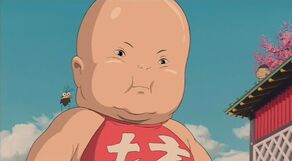 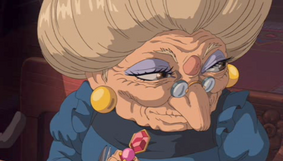 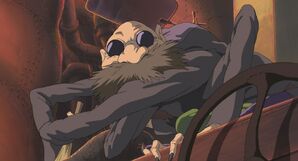 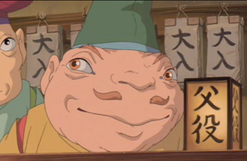 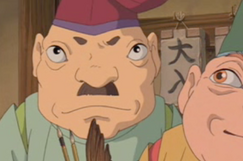 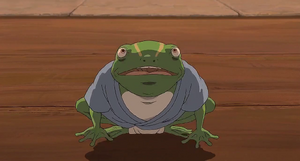