November 26, 2005[5][6]
Star Wars: Clone Wars is an Emmy Award and Annie Award-winning American animated microseries set in the Star Wars universe. The series was produced by Cartoon Network Studios in association with Lucasfilm Ltd., and was aired both online and on Cartoon Network in 25 chapters from 2003 to 2005.

The first two seasons, comprising Volume One, were produced in a two to three minute "micro" format, while season three was produced as fifteen minute episodes making up Volume Two. Both volumes were later released on home video edited as feature length films. It was ranked 21 on IGN's Top 100 Animated Series list. Entertainment Weekly ranked the series 20th out of 25 of the best science-fiction films or television of the past 25 years (1982–2007).

The success of Star Wars: Clone Wars, which Star Wars creator George Lucas has referred to as the "pilot series," led to a second Clone Wars series—the similarly titled Star Wars: The Clone Wars—which was produced by Lucasfilm Animation and debuted on Cartoon Network in 2008.

Star Wars: Clone Wars only had brief stints on the Toonami block, with the majority of these appearances coming in the form of marathons or mini-marathons. The series first aired on Cartoon Network's Toonami block from December 1-12, 2003[1] and made its final appearance on November 26, 2005.[5]

Chronologically, the series takes place during the three-year time period between the films Attack of the Clones and Revenge of the Sith. The show depicted the actions of various characters in the Star Wars prequel trilogy, including Anakin Skywalker, Obi-Wan Kenobi, Mace Windu, and other Knights of the Jedi Order during the conflict, leading the clone trooper forces of the Galactic Republic against the battle droid armies of the Confederacy of Independent Systems and the Sith.

Star Wars: Clone Wars is part of the prequel trilogy storyline surrounding the fall of esteemed Jedi Knight Anakin Skywalker and his subsequent transformation into the Sith Lord Darth Vader. With the series beginning in the year 22 BBY (in real world terms, twenty two years before the events of the original Star Wars film; A New Hope), the Clone Wars have just begun, with the frailing Galactic Republic and the Jedi Order under siege from the Confederacy of Independent Systems, who wish to secede from Galactic society with the help of the Sith. As the war rages, more and more planets slip from Republic control. Both the Jedi and the Sith use a metaphysical power source known as the Force for a variety of purposes, however in different manners: the Jedi draw on the "light" side, which is fueled by selflessness and compassion, while the Sith draw on the "dark" side which is fueled by primal urges such as greed and hate.

Most of the characters from the Star Wars prequel trilogy make appearances in the series, but most of the series is centered around the Jedi Knights (Anakin Skywalker, Obi-Wan Kenobi, Mace Windu, Yoda, etc.) and their roles in the battles of the Clone Wars that take place between the prequel films Attack of the Clones and Revenge of the Sith. 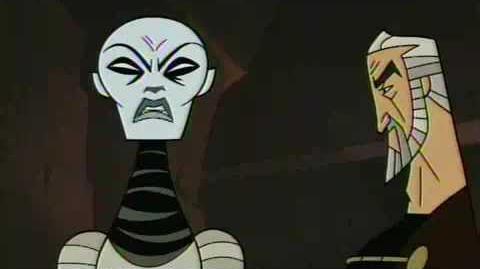 Star Wars: Clone Wars has been dubbed a "micro-series" by its creators as the individual episodes were very brief, with the first two seasons consisting of 3-minute episodes, and the final third season's episodes lasting 12 minutes each. The series was produced by Genndy Tartakovsky and employs a similar animation style to Tartakovsky's Samurai Jack. Tartakovsky revealed in his Hyperspace commentary tracks on the official Star Wars website and on the Volume I DVD that he purposely animated C-3PO with moveable expressive eyes to pay homage to the animators of and the animation style of Nelvana, the production company behind the animated segment from The Star Wars Holiday Special and the 1980's Droids cartoon series.

The series, produced primarily with traditional animation, originally aired on Cartoon Network. In addition to being shown on television, the episodes were released online simultaneously on the Star Wars and Cartoon Network websites. The series was heavily advertised by Cartoon Network, and was originally shown immediately before their popular Friday night lineup. The series also aired in the UK, Latin America and Canada.

The following is a list of Toonami marathons in which at least one episode of Star Wars: Clone Wars appeared.