Destroyed by the Intruder

TOM 3.5
TOM 4 was the fifth host of Toonami and the fourth incarnation of TOM after TOM 3. TOM 4 was voiced by veteran voice actor Steve Blum. This version of TOM remained in service for 1.5 years, from March 17, 2007 to September 20, 2008, when the Toonami block was cancelled by Cartoon Network.

TOM 4 had a much smaller body than his predecessor and has a frame with rusted metal and peeling blue and yellow body paint. No longer a visored robot, this is the first and only TOM to have facial features. The creators wanted a new TOM without a helmet, and to look more organic compared to his past incarnations. Some fans have commented that TOM 4's face resembles Thomas the Tank Engine, from the popular children's television series Thomas & Friends. He lacks a symbol on his body.

On March 17, 2007, TOM 4 was introduced along with his new assistants: Flash and D. With these new characters also sharing hosting responsibilities. In addition, this was the first TOM unit to not have custody of any version of the spaceship Absolution, which had been the base of operations for the block since July 1999. Instead, TOM 4 hosted from Flowus 3, a broadcast station located on an unnamed jungle planet.

TOM 4 officially ended the Toonami block on September 20, 2008. In the final moments of the broadcast, D and Flash are seen readying Flowus 3 for permanent shutdown, and TOM thanks the viewers, flies away, and is heard saying "bang.", a reference to voice actor Steve Blum's previous role as Spike Spiegel from Cowboy Bebop. The farewell speech was as follows:

"Well, this is the end, beautiful friends. After more than eleven years, this is Toonami's final broadcast. It's been a lot of fun. We'd like to thank each and every one of you who made this journey with us. Toonami wouldn't have been anything without you. Hopefully we've left you with some good memories. So, until we meet again, stay gold. Bang."

After the Toonami block was revived on Adult Swim, TOM 4 appeared on the block at some point, having a conversation with the current host, TOM 3.5. Both TOMs stated that they should tell a story someday, presumably about TOM 4's origins, and TOM 4 stated that running Toonami was all up to TOM 3.5 now. This conversation proved that TOM 3 and 4 are different individuals and hinted at a possible T.I.E. in the future.

This TOM model's final appearance came in the Intruder II companion comic in which he, Flash, and D end up stranded at "an abandoned station on an unknown planet". Here he finds a component which he uses to speed up Flash's processor. This, however, compromises Flash's systems and allows The Intruder to take over his body. The next 36 hours left TOM 4 running for his life, attempting to figure out how to get Flash back, while the Intruder himself drew closer to their location. Eventually, Flash captures TOM and the Intruder orders him destroyed. Meanwhile, D, who has been in a rather odd state of mind, finds a component to return the station's controls back to normal and thus frees Flash. As the Intruder tries to flee, Flash hits him with a rocket launcher, seemingly destroying him. However, the final panel shows bits of the Intruder dripping back into the station, leaving TOM 4 and his crew's fates unknown. However, it was later confirmed by The Intruder itself in The Intruder II, Episode 5 that TOM 4 was destroyed after the events of the comic.

As host of Toonami, TOM 4 delivered only 2 video game reviews. 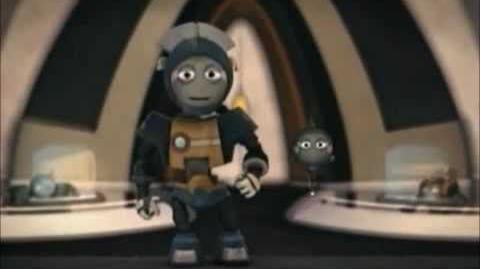 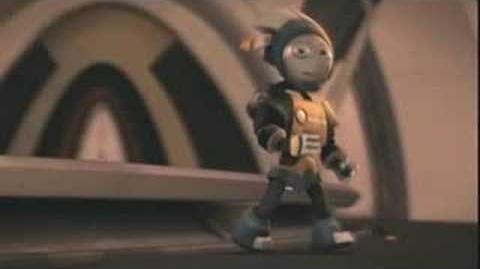 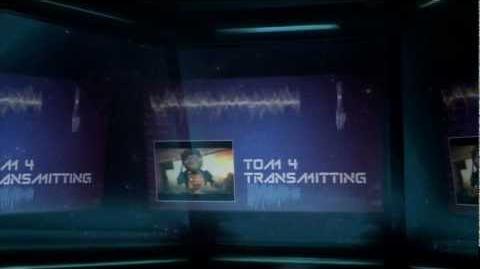 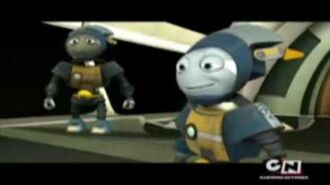 Toonami - Behind The Scenes 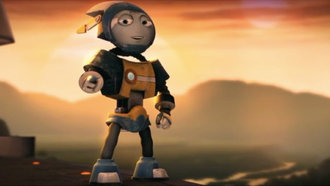 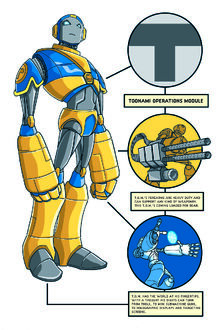