The Teen Titans' home town is attacked by a Japanese ninja named Saico-Tek. Under interrogation Saico-Tek reveals the identity of the one who sent him, Brushogun. The ninja then escapes and the Titans head to Tokyo, Japan, to search for his master.

After overcoming the language barrier (Starfire kisses a Japanese boy and learns how to speak Japanese, much to Robin's shock and jealousy) and fighting a Godzilla-like giant reptile, the Titans meet Tokyo's own super-natural defense force - the Tokyo Troopers, led by Commander Uehara Daizo. Daizo shows the Titans around the Tokyo Troopers headquarters, and when Robin questions him on Brushogun, he informs the Titans that he is nothing more than an urban legend. Left with no villains to pursue, the Titans can do nothing more than bow to Beast Boy's desire to enjoy Tokyo as tourists.

Everyone goes off to separate parts of Tokyo to do their own thing; Cyborg goes to "an all you can eat" restaurant, Beast Boy follows a cute girl around eventually going to a karaoke bar and Raven goes around book stores to try and find something to read. Meanwhile Robin and Starfire are having fun going almost everywhere in Tokyo, they later sit on top of the Tokyo tower. Starfire talks to Robin about the kiss she had with the boy from before, which makes Robin bring up how Starfire kissed Robin when they first met and that he now understands it was to learn English but Starfire notes that she has now learned that, on Earth, the action means more. Robin and Starfire then come to explain the they are best friends and nothing could ever get in the way of that, and as they are about to kiss Robin suddenly starts to focus on Brushogun again and tells Starfire that they are heroes and they can't be anything more. Starfire feeling hurt then flies away with tears in her eyes.

Investigating alone, Robin is attacked once more by Saico-Tek and they get into a very violent fight which ends with Robin pummeling the ninja into the ground. When Saico-Tek does not rise, the crowd watching believes Robin has murdered his opponent. Commander Daizo apprehends Robin, despite the hero's protestations of innocence, but as he is transferred, a slip of paper bearing the name "Brushogun" flits into the armored car carrying him and explodes, freeing him. Now on the run, Robin co-opts the identity of a Shinjuku mugger who tried to shoot him and reunites with the other Titans, who have themselves been attacked by strange creatures.

Brushogun, as Raven relates from the book she found, was an artist who had fallen in love with a woman he had drawn and had attempted to bring her to life using Japanese black magic. The spell turned against the artist and he was transformed into a being composed of paper and ink - ink that he could use to bring any creation he could imagine to life. With this new information, Robin has no trouble deducing Brushogun's hideout: Beast Boy's favorite manga publishing house. Breaking in, the Titans discover the withered form of Brushogun, wired into a printing press that draws on his powers to create the enemies the Titans have faced. The true villain turns out to be Daizo, who has used Brushogun's powers to create both his Tokyo Troopers and the monsters that they captured so that he could earn a reputation as a hero.

A massive battle ensues, culminating in Robin facing Daizo. With no options of escape left, Daizo hurls himself from the catwalk, into the ink reservoir of the press, taking control of Brushogun's magic powers and transforming himself into a giant, hulking mass of ink and machinery, with Brushogun at the center. As the other Titans battle creatures Daizo hurls at them, Robin frees Brushogun. As the old man fades away in his arms like ink, his powers disappear and Daizo is left defeated and exposed.

After the battle, Robin tries to explain his true and strong romantic feelings for Starfire, but getting the message, she silences him by simply saying, "Robin, stop talking." The two romantically share their first proper kiss as the other three Titans look on, with Cyborg stating, "Well, it's about time" implying that they all knew they were going to get together one day. A short time later, the Titans are awarded medals of honor by the mayor for their actions, and the inhabitants of Tokyo welcome their new heroes. Robin and Starfire are seen holding hands, implying that they are now a romantic couple. Beast Boy then declares that he wants to go to Mexico next year, prompting Raven to slap him in the back of his head. 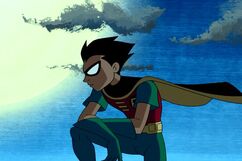 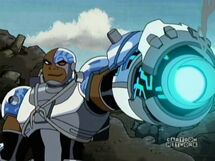 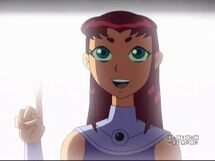 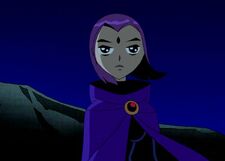 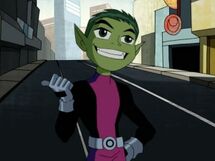 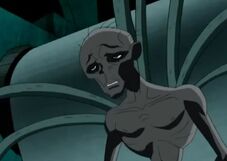 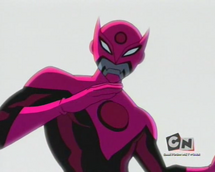 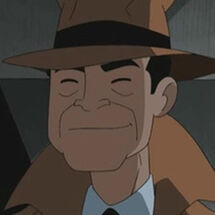 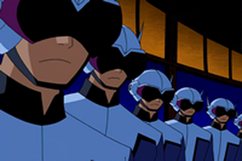 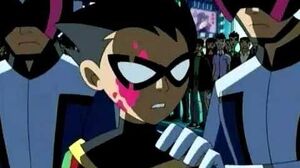