26 (List of Episodes)
Tenchi Muyo! GXP is a Japanese anime series created by AIC and originally broadcast in Japan on NTV from April 3, 2002 to September 25, 2002.

The series was licensed by Funimation in 2003 and an English dub was produced in collaboration with Redshift Productions.[2] The English dub aired on Adult Swim's revived Toonami programming block from November 10, 2012 to May 11, 2013.[1] It is the fourth installment of the Tenchi Muyo! franchise to air on Toonami behind Tenchi Muyo! Ryo-Ohki (first two OVAs), Tenchi Universe and Tenchi in Tokyo. The series was rated TV-PG-DV and TV-14-DLSV on Adult Swim.

Seina Yamada is a young Japanese high school student living with his parents and younger sister in rural Okayama, Japan. One morning, following a hapless bike ride through the country, a large spacecraft crashes into the lake behind the Masaki residence, causing a violent tsunami that Seina is unable to escape from and he sinks, almost drowning. He regains consciousness shortly after, meeting Amane Kaunaq, the spacecraft's pilot, who gives Seina an application. Seina takes it, and shows it to his family at home. Mistaking it for a contest entry, his mother and sister aggressively force him to fill it out; afterwards he retreats to his room and falls asleep. The following morning, awakened aboard a vessel in orbit, Seina is informed by an official that he has successfully joined the Galaxy Police. It also revealed that the Galaxy Police were originally meant to recruit Tenchi, but they got Seina instead.

Unlike Tenchi Universe and Tenchi in Tokyo, which are continuations/reimaginings of Tenchi Muyo! Ryo-Ohki, GXP occurs during the same time period, making it a parallel series to the show. As such, the more-recognized cast do not play central roles, though they do make cameo appearances.

Seina Yamada — The unlikely protagonist of the series, Seina, a fifteen-year-old high school student with a supernatural penchant for bad luck, is mistakenly enlisted to the Galaxy Police after being coerced to fill out an application, which was meant to be given to Tenchi. His ultimate decision is to enroll, finding that, in company of others and as the captain of his own ship, his otherwise unfortunate talent proves incredibly useful in rounding up pirates and other lawbreakers.

Amane Kaunaq — Amane is a twenty-year-old Galaxy Police detective whose crash landing at the start of the series is solely responsible for the events that later ensue. Her mission on Earth was to give the application to Tenchi, but she mistook Seina as Tenchi's apprentice. In spite of her justified decision to give Seina an application, she is demoted from her position as an officer to that of an instructor in order to better supervise and train him. With a genuine crush and empathy for the boy, Amane grows to like her new responsibility, becoming a weapons specialist when the group are assigned their own patrol.

Kiriko Masaki — Kiriko is a twenty-year-old Immigration Officer for the Galaxy Police whose double life in the agency is completely unknown to her family and peers on Earth. Having grown up around Seina and developed a sympathy for his misfortune, she is the most familiar with him and self-assigns herself the role of being his guardian and caretaker when he is accepted to the academy. Unfortunately, her pride and distinction comes with a price, and in a manner identical to that of Amane, she too is demoted.

Ryoko Balta — Ryoko is a nineteen-year-old space pirate captain and member of the notorious Da Ruma guild, who in spite of her ruthless profile, exhibits behavior quite the opposite of her profession. She is introduced to Seina early into his travel to the academy, bestowing a humble, competitive respect for him when his paranormal luck aids in the arrest of several dozen ships of her fleet. Her admiration for him develops into a more passionate one however, and with her conscience run thin, Ryoko finds herself caught between her feelings and her allegiance to the guild.

Neju Na Melmas — Neju, contrary to her stature and demeanor, is a two-thousand-year-old former priestess of Melmas, a distant planet of religious psychics. Following a brief, unelaborate encounter with Seina, she makes a more established presence when he and the group are asked to escort her aboard their ship. To the blatant angst of the other girls, she grows ardently fond of Seina, looking up to him as an older brother figure and even making plans to marry him.

Fuku — Fuku is an infantile cabbit, developed as the nucleus of Seina's succeeding vessel, the Kamadaki II. As the heart and powerhouse of the ship, Fuku exercises superseding control over its entirety, most notably its energy output, which is influenced by her emotional vigor. She is initially troubled by the stress of belligerence, stunting her from exercising full potential, but soon finds the strength to rise to the occasion and become a paramount member of the crew.

NB — NB was Originally a standard helper robot that Seina was issued when he enrolled in the G.P. Academy. However, Kiriko and Erma, not trusting Amane with Seina, added a video camera for surveillance. However, a short circuit, caused by Amane's modifications altered the personality of the robot. NB's still the helper robot it was originally designed for, but now it has the personality of a voyeuristic pervert. NB is almost never found without its camera, hoping to catch girls in various stages of undress. However, the girls do catch it, the end result is NB getting dented. 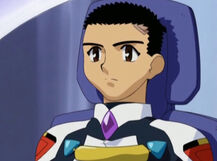 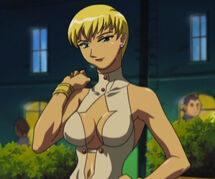 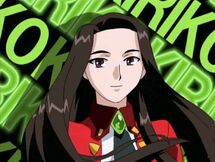 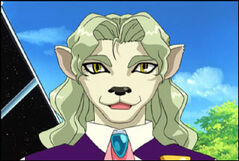 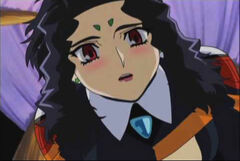 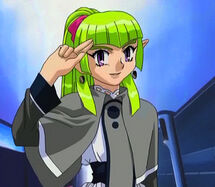 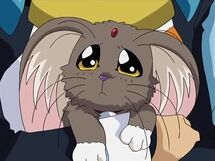 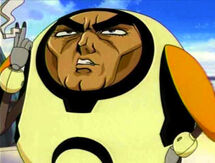 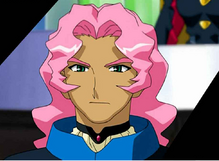 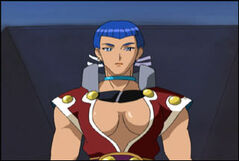 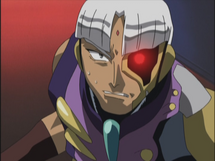 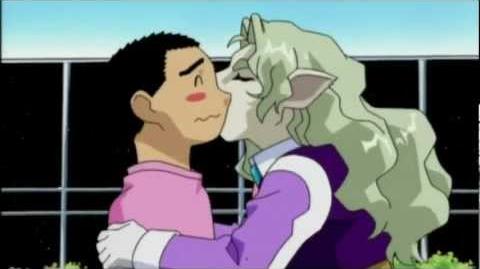 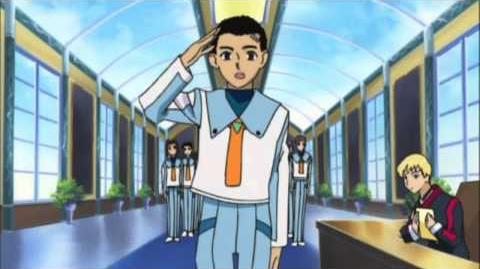 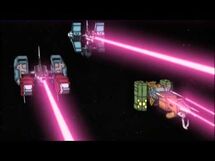 All episodes of Tenchi Muyo! GXP have been released in the United States on DVD.