April 2-12, 2002[4]
Tenchi in Tokyo is a 26-episode anime series produced by AIC and Pioneer Animation (now Geneon Entertainment) and licensed in North America by FUNimation Entertainment. It is the third installment (behind Tenchi Muyo! and Tenchi Universe) from the Tenchi series. Tenchi in Tokyo was planned as a continuation of Tenchi Universe but eventually became a retelling and re-introduction of Tenchi Muyo! characters.

Even though a lot of the characters return, most of them differ significantly from their original counter parts. Some of the differences include their clothing, backgrounds, and personalities. Tenchi in Tokyo does have an original story, unlike Tenchi Universe which borrowed heavily from Tenchi Muyo!. Tenchi in Tokyo was met with mixed reception. It is often considered one of the more disappointing installments of the franchise due to the significant changes that were made to the story and characters.

The English-dubbed version premiered in the United States on Cartoon Network's Toonami block on August 25, 2000, after Tenchi Universe ended its run. The Toonami version was edited for content, and featured custom opening and closing credits.

Tenchi decides to move to Tokyo in order to lead a normal life in the big city. While in Tokyo, Tenchi meets a girl named Sakuya. They soon fall in love but as it turns out a dark sinister force has created Sakuya to get at Tenchi and rule the earth. Now Tenchi must balance love, friends, and life while defending the earth one last time.

Tenchi Masaki — in this series, Tenchi's personality and background are different. He has no connections to Jurai and the sword is created from seven gems which he inherited from his late mother. Ryoko separated the gems to prevent the sword from being used against her again. Each of the six girls took one of the gems as a keepsake. Tenchi moved to Tokyo to train as a Shinto priest under a friend of his grandfather's. Eventually, Tenchi got tired of the girls' frequent visits and ordered them never to disturb him again.

Ryoko — Once again, Ryoko is a space pirate in this series. She and Washu were in the process of running away with the Jurai Lightstone, which consequently brings everybody to Tenchi's planet all at once. She pilots a pink Sōja. Her physical appearance is considerably different in comparison with the other series due to the artwork, which made her look more tomboyish than she used to be. Her attitude is also very different, she's more violent and screams a lot more, so many things get blown up around her. Ryoko's obsession over Tenchi is still there, but that's basically the only characteristic that remains consistent throughout every series. However, it develops to a greater extent in this series after she goes on a date with Tenchi, and later sees him with Sakuya. Her hurt feelings for Tenchi made her even abandon the group after she sees him and Sakuya kiss. She still retains the ability to summon an energy sword and fire energy blasts, but Ryo-Ohki doesn't belong to her. Also she cannot survive without oxygen unlike the previous series.

Ayeka Masaki Jurai — In this series, Ayeka is once again a princess of Jurai. She teams up with the Galaxy Police to capture the space pirate Ryoko and scientist Washu, who stole the Jurai Light Stone. After they crash-land onto Earth, Ayeka fights Ryoko, who turns the tide of the battle in her favor by absorbing the light stone herself; it isn't until Tenchi's intervention that Ayeka is saved. She is the pilot of the Ayesa, which is identical to her Ryu-Oh. Instead of being completely shy and demure, she's similar to Ryoko in terms of explosive emotions. She's a lot more gullible than in the other series and is occasionally ditzy. On the other hand, unlike Ryoko, she does somewhat accept that Tenchi may prefer Sakuya Kumashiro to herself and others, as she confesses to a woman named Masayo whom she and Sasami aided once. Unlike Ryoko, she decides to stay on Earth; she aids Washu with her research about Yugi, and attempts to protect Sasami and the Masaki household, ending up seriously injured by Matori. Ayeka is the first to notice that she and the others are being unwillingly separated by Tenchi, which greatly worries her. Her powers are still similar to the other two series, except we never see her fling energy blasts. Instead, she activates her forcefield on many occasions. Her Guardians, Azaka and Kamidake, take on a more combative role instead.

Sasami Masaki Jurai — As with most of the characters, Sasami's personality became much louder than before. Her moods are more erratic, given to bouts of juvenile anger and sulking. She becomes friends with Yugi, before learning Yugi's true nature, but remains her friend until the end of the series. At the end of the series Sasami visits the now-sleeping Yugi everyday. Ryo-Ohki is also her pet in this series.

Mihoshi Kuramitsu — In this serie Mihoshi is once again partnered with Kiyone. In a flashback story, the Miho-Kiyo duo worked with the Juraian forces (led by Ayeka) to capture Ryoko and Washu to reclaim the Jurai Light Stone. Eventually, they were forced to crash-land on Earth after Washu detected great energy emitting from the planet. She is more or less the same as her Tenchi Universe counterpart.

Washu Hakubi — In this series Washu is a renegade scientist who helped Ryoko steal the Jurai Light Stone, an artifact of the planet Jurai, and was pursued by the Juraian forces (led by Ayeka) and the Galaxy Police (led by Mihoshi and Kiyone). During the chase, Washu sensed an unusual energy source emitting from Earth, and after they were forced to crash-land on Earth, Washu sensed that the power came from Tenchi's necklace (an heirloom handed down from his late mother. Throughout the series, while researching his necklace, Washu invented various items that would allow the girls to see Tenchi during his time in Tokyo (notably, a dimensional portal); however, her inventions would often malfunction. Personality-wise, she's still a mad scientist, but she is more mellowed-out than her Tenchi Universe incarnation.

Kiyone Makibi — Kiyone's character design and personality are quite different than in the previous series. Kiyone acts more along the lines of a manic depressive and is more driven towards being promoted and assigned to the Galaxy Police headquarters than her Tenchi Universe counterpart. She also expresses romantic feelings for Tenchi, feeling that he would be better off with a law abider like herself than with the others, though this may have just been to goad Ryoko to come back to Earth. Mihoshi and Kiyone were originally part of the Galaxy Police task force assigned to apprehend the space pirate Ryoko and her partner Washu in order to recover the stolen Jurai Light stone. in the end Kiyone chooses friendship over career ambitions by returning to Earth with Mihoshi to fight Yugi. But their shuttle was shot down en route by Tsugaru, another of Yugi's attendants. Using an experimental antimatter bullet, Kiyone was able to kill Tsuguru after Mihoshi shielded her from an attack; she then helped Tenchi and the others in the final battle against Yugi. Shortly thereafter, the two GP officers are all too happy to patrol the Earth beat once again.

Sakuya Kumashiro — Sakuya Kumashiro has been rated 3rd on Temangu High's "Must Have List" by her male classmates. However, it is newcomer Tenchi Masaki that gets her attention. On one of his first days, she chooses to sit next to him at lunch, much to the envy of the other guys. Over the course of the series, the two become closer, culminating in the school carnival, where the two share a kiss while Ryoko is watching, causing Ryoko to run away for much of the series' remaining episodes. Sakuya has strong feelings for Tenchi, and, in the end, her love becomes so strong that she cannot bear to be without him. This only gets stronger when Sakuya has a great realization near the end of the series. Yugi keeps a close eye on her, and Sakuya seems to be involved in her plans.

Yugi — The main antagonist of the series. Her appearance is that of a young blonde girl with a red and black striped headdress and large spiked armor that hovers around her. Throughout much of the series, her plans remain in shadow, and all the viewer sees of her much of the time is her watching a group of floating crystals which represent the Masaki Family, while commenting on the events of the episodes. She has three henchmen: Hotsuma, Tsugaru, and Matori, who do almost all of her work for her. 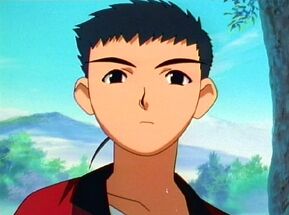 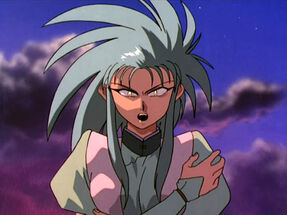 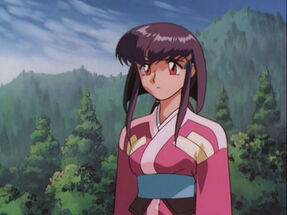 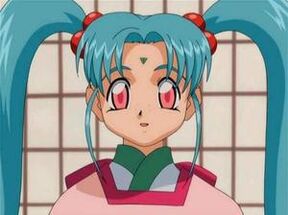 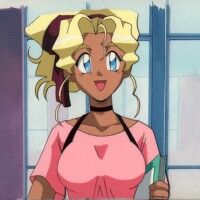 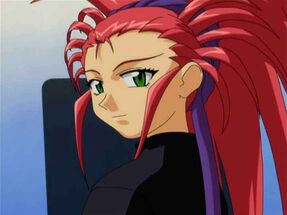 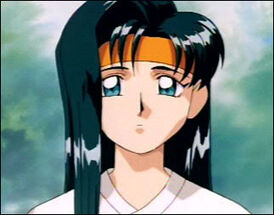 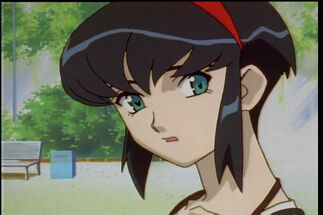 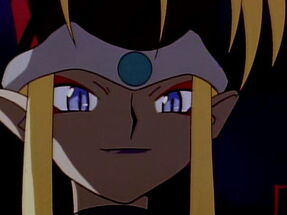 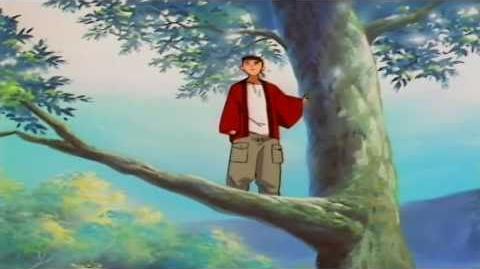 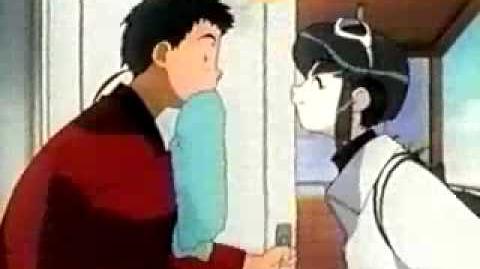 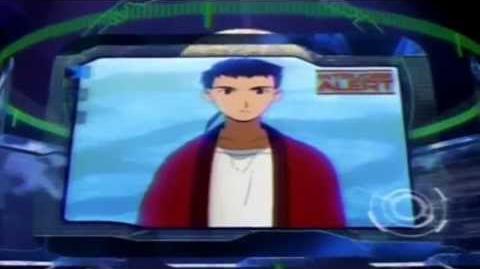 The original Japanese episode titles take the form of haiku (three lines containing five, seven, and five syllables). Rather than translate the titles directly for the English releases, new episode titles were made up which do not usually bear a close resemblance to the meaning of the Japanese title.

Pioneer Entertainment released the series on VHS and DVD until shutting down in 2007. In 2010, Funimation Entertainment announced that that they had licensed a handful of former Geneon titles including Tenchi in Tokyo. A complete box set was released on November 13, 2012.

Tenchi in Tokyo aired in Japan on TV Tokyo from April 1, 1997 to September 23, 1997. The English-dubbed version premiered in the United States on Cartoon Network's Toonami block on August 25, 2000, after Tenchi Universe had ended its run. The series last aired on the network on April 12, 2002. In Latin America, specifically Chile, the series aired on Chilevisión as part of the "El club de los tigritos" programming block in 2002.