November 11, 2006[2] - December 23, 2006
The Batman is an American animated television series produced by Warner Bros. Animation based on the DC Comics superhero Batman. It ran for five seasons consisting of 65 episodes from September 11, 2004 to March 8, 2008, on the Saturday morning television block Kids' WB. The series follows a young Bruce Wayne in his third year of trying to establish himself as Batman, protector of Gotham City. Living in Gotham, a metropolis where shadows run long and deep, beneath elevated train tracks. This younger Batman confronts each of his familiar foes for the first time.

Although the series borrows many elements from previous Batman storylines, it does not follow the continuity set by the comic books, the film series, or Batman: The Animated Series and its DC Animated Universe spin-offs. The character designs were provided by Jackie Chan Adventures artist Jeff Matsuda; he also directed the ending. The series won six Daytime Emmy Awards.

In the first season of The Batman, Bruce Wayne, is 26 years old, and has been the Batman, protector of Gotham City, for three years, (before his existence was publicly confirmed in the first episode). Along with a secret Batcave, high tech Batmobile, and supercomputer, called the Bat-Wave, he has his trusty butler Alfred Pennyworth, who guides both Bruce Wayne and The Batman when needed. Other characters include Ethan Bennett, a cop who believes The Batman is needed in Gotham, and at odds with Chief Angel Rojas, who has no room for vigilantes, and Ellen Yin, Bennett's partner who is torn between her belief in law and order and her personal feelings toward the Batman. Both Bennett and Yin are charged with capturing the Batman throughout Season 1.

While crime in Gotham is at an all time low, new foes emerge and The Batman confronts his rogues gallery for the first time. The first season featured new interpretations of The Batman's villains such as Rupert Thorne, The Joker, The Penguin, Catwoman, Mr. Freeze, Firefly, Ventriloquist and Scarface, Man-Bat, Cluemaster, and Bane.

Season 2 introduced more villains: Riddler, Hugo Strange, Rag Doll, Spellbinder, Killer Croc, and Solomon Grundy. At the end of this season, Yin is found out to have been working with The Batman. At the same time, another main character to the Batman mythos, Commissioner James Gordon is introduced, along with the Bat-Signal. Yin and Chief Angel Rojas make their final appearances in the season finale.

Season 3 introduced a young Barbara Gordon, who becomes Batgirl and plays a major role along with her father, Commissioner James Gordon. Barbara tries to be The Batman's sidekick, but he refuses to accept the need for a partner until the end of the season. This differed from the comics, in which Robin was The Batman's first sidekick; this was due to the Teen Titans animated series using the character, limiting his ability to appear in other shows.

Season 4 featured a redesign to Bruce Wayne, with a stronger facial and chin structure, making him reminiscent of the DCAU Batman design.

Dick Grayson as Robin was also introduced into the show, as the Teen Titans animated series had been cancelled earlier in the year before this season started. Batgirl is now part of the team and found out the secret identities of both The Batman and Robin, and Lucius Fox is introduced in the season finale.

One of the highlights of Season 4 was "Artifacts", an episode describing a possible future, that had elements from Frank Miller's The Dark Knight Returns. Set in 2027, with the main storyline in 3027, it features a wheelchair-using Barbara Gordon as Oracle, Dick Grayson as Nightwing, with both The Batman and the Batmobile resembling the versions in Miller's series.

The season finale featured an alien invasion by entities called "The Joining", and another superhero from the DC Universe; Martian Manhunter/J'onn J'onzz. In this episode, J'onn brings The Batman to a Hall of Justice Watchtower orbiting the Earth where he introduces him to Hawkman, Green Arrow, Flash, and Green Lantern as part of the Justice League of America.

The fifth and final season was said by producer Alan Burnett to be the show's "The Brave and the Bold season." This season primarily focused on the Dynamic Duo (The Batman and Robin) teaming up with members of the Justice League. Batgirl and Commissioner Gordon were dropped from the show as main characters, and only appeared rarely as guests or cameos. In Batgirl's case, this is because she has graduated from high school and is attending college.

Villains for this particular season were a combination of villains associated with the Justice League members appearing on the show with some of the Batman villains. Villains include Lex Luthor, Mercy Graves, Metallo, Count Vertigo, The Wrath, Toyman, Shadow Thief, Sinestro, Mirror Master, and the Terrible Trio. Also, Firefly becomes Phosphorus. The Joining returns in the finale in alliance with Hugo Strange. The final episode was a 40-minute movie, featuring all the members of the Justice League who have made an appearance in the show.

Batman/Bruce Wayne — Both identities are based on the comic book character of the same name and follows the same premise and origin: having his parents murdered in front of him at a young age and swearing vengeance on criminals. In the show he has recently started his career as a masked vigilante.

Dtective Ethan Bennett/Clayface — Bennett was created specifically for the series as one of the three recurring police officers to interact with Batman. He is a supporter of the Batman and is Bruce Wayne's old friend within the Gotham City Police Department. At the end of the first season, fumes from the Joker's "Joker Putty" gives him the ability to reshape himself like clay. Taking the name Clayface, he becomes an outlaw.

Commissioner Jim Gordon — Introduced in season 3, Gordon is based on the comic book character of the same name, he serves a similar function here as Batman's contact within the Gotham City Police Department. Unlike in the comics, the character is a later cast addition rather than a character from the beginning. According to producer Jeff Matsuda, Gordon is the young officer seen in the flashback in the episode "Traction".

Robin/Dick Grayson — Introduced in season 4, the character is based on the Dick Grayson version of Robin from the comic books, he also borrows elements from the Tim Drake version, such as costume design and computer aptitude. His origin in "A Matter of Family" follows Grayson's from the comic books with the exception of his being Batman's second sidekick but his first official sidekick. The episode "Artifacts" included sections set in the year 2027 with the character appearing as Nightwing, based on the superhero the comic-book Grayson became as an adult.

Chief Angel Rojas — Rojas was created specifically for the show as one of the three recurring police officers to interact with Batman. He is the head of the precinct where Yin and Bennett work and most of the episodes are set. He believes the Batman is the worst aspect of the criminal element and makes capturing him a priority.

Detective Ellen Yin — Yin was created specifically for the show as one of the three recurring police officers to interact with Batman. She is a new transfer to the Gotham City Police Department who does things by the book. Initially she has misgivings about the Batman, which over the course of the show changes to a grudging respect.

Alfred Pennyworth — Based on the comic book character of the same name, he serves the same function, as Wayne's butler, aide-de-camp, and surrogate parent. 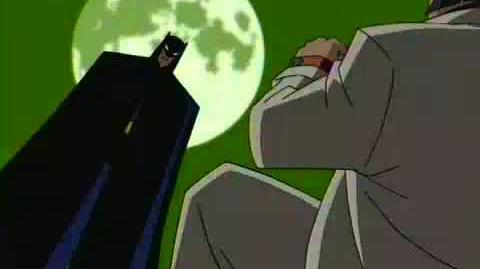 Although the series borrows many elements from previous Batman storylines, it does not follow the continuity set by the comic books nor that of the previous Batman: The Animated Series. Also, the animation style bears a strong resemblance to that of Jackie Chan Adventures, since Jeff Matsuda was the chief character designer for both shows. The designs of many supervillains, like the characters Joker, Penguin and Riddler, are very different from those of their comic counterparts.

The first five seasons have been released on DVD in North America. A Direct-To-DVD movie titled The Batman VS Dracula, based on the series, was released on October 18, 2005 and made its television debut on Toonami on October 22, 2005. There is also a spin-off comic book series, The Batman Strikes!, published by DC Comics which is set in the same continuity and style as the series.