The Batman VS Dracula

The Batman VS Dracula

7:00 PM
The Batman VS Dracula is a 2005 direct-to-video animated movie based on The Batman television series. It has a much darker tone than the series, and features Vicki Vale in her first animated appearance (voiced by Tara Strong, who previously voiced Batgirl in Batman: The Animated Series). The movie was released on DVD on October 18, 2005.

In this darker themed movie based on The Batman series, Gotham City is terrorized not only by recent Arkham escapees Joker and Penguin, but by the original creature of the night, Dracula! Can Batman stop the ruthless vampire before he turns everyone in the city, including the aforementioned super villains into his mindless minions?

When the movie was first aired on TV, it was given a TV-Y7-FV rating as it was assumed that it was going to be in the same tone as the kids TV series; however since there were more adult themes, and blood and violence, the rating was later changed to TV-PG.

The Joker and the Penguin break out of Arkham Asylum and race each other to find a stash of stolen money hidden within a crypt in Gotham Cemetery. The Joker is quickly intercepted by the Batman and is electrocuted when he falls into a river by his super-charged joy buzzers while the Penguin takes the opportunity to enter the cemetery himself. While searching through a crypt, the Penguin accidentally cuts his hand while using his umbrella-sword to open a coffin he hopes contains the money, finding a body instead. The blood from his hand drips on the corpse's heart, which brings it to life; it is none other than the vampire lord Count Dracula, his body having been moved from Transylvania to Gotham City after his "death". After attacking and turning a watchman at the cemetery into a vampire, Dracula hypnotizes the Penguin into becoming his non-vampiric servant so that he may lead him through Gotham to feed and guard his coffin during the day while he regains his strength.

While patrolling the city, the Batman witnesses a vampire attack, but decides to put the incident in the back of his mind and, as Bruce Wayne, proceeds to host a corporate party at his manor. The invigorated Dracula appears at the party, disguised as a cultural anthropologist under the name Dr. "Alucard" ("Dracula" spelled backwards), claiming to be visiting to study the Batman (believing his legacy had an influence on Batman's existence), and takes an interest in Vicki Vale, a reporter who is interviewing and dating Bruce. After failing to turn Bruce into a vampire to quench his thirst, Dracula turns a waiter into a vampire that assaults Bruce's butler Alfred. Realizing the imminent danger, Bruce immediately deduces "Alucard" is Dracula.

Upon further research, Bruce learns that Dracula is behind the disappearances of several Gotham citizens, who have been dubbed "Lost Ones" by the media and turned into vampires, and attempts to find a way to synthesize a vaccine for the victims. Due to eyewitnesses claiming to see a bat-like figure during the attacks, however, it is mistakenly reported that the Batman is behind the disappearances instead. When Batman goes to Gotham Cemetery to look for Dracula, he gets chased down by a SWAT unit, all of whose members are taken by Dracula as they chase him back into the city. During a fight with the Batman, Dracula offers him the chance to join him in his conquest of Gotham, though the Batman naturally refuses. Just as Dracula has the Batman at his mercy, the sun rises and Dracula is forced to retreat, vowing to kill Batman for rejecting his offer.

At the cemetery, the Joker reappears alive and well and confronts the Penguin, saying the shock to his head helped. He asks where the treasure is, thinking Penguin has already found it, chasing him into Dracula's tomb. However, despite Penguin's warning to not open Dracula's coffin, Joker ends up as "breakfast in bed, freshly-squeezed" for Dracula. The Batman tracks down the vampire Joker as he feasts in a blood bank and captures him. While the Batman attempts to concoct an antidote from the Joker's infected cellular structure, Alfred discovers that Dracula once had a vampire bride, Carmilla Karnstein, who met her demise when she was exposed to sunlight. During his research, however, Bruce stands up an understanding Vicki, who is soon kidnapped by Dracula. Finally, the Batman is able to cure the Joker of his vampirism and ascertain the location of Dracula's lair in Gotham Cemetery before returning him to Arkham. He then proceeds to mass-produce the vaccine to defeat Dracula and cure his victims.

Dracula attempts to sacrifice Vicki's soul to reanimate his bride Carmilla. Upon learning that Vicki has been kidnapped, the Batman rushes to Dracula's lair with his anti-vampirism vaccine and arsenal of weapons, defeating and curing all the "Lost Ones" that attack him in the catacombs beneath Gotham Cemetery. The Batman then frees Vicki, disrupting the reanimation ritual. Dracula sends the Penguin to recapture Vicki while he fights the Batman, who lures Dracula into the Batcave and towards his prototype solar energy-storing machine and incinerates him with the sunlight stored within, reducing Dracula to a pile of ash and bones. This also frees the Penguin from his control, who, while chasing Vicki, finally finds the hidden treasure that caused all the trouble in the first place. Sadly for Penguin, he is arrested and blamed for Dracula's kidnappings, causing the media to think he was forcing people to find the treasure. Having defeated an ultimate evil, the Batman triumphantly continues his duties to defend Gotham against anyone who may threaten its safety. 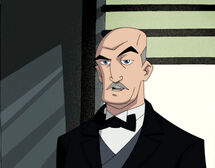 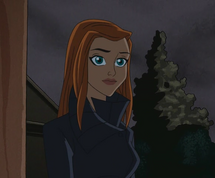 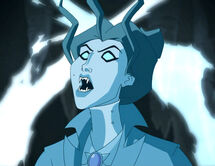 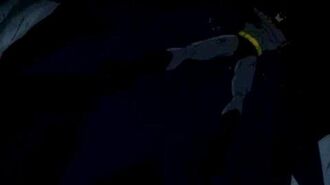