March 5-12, 2004[7]
The Powerpuff Girls is an American animated television series created by animator Craig McCracken and produced by Hanna-Barbera (later Cartoon Network Studios) for Cartoon Network. McCracken originally developed the show in 1992 as a cartoon short entitled Whoopass Stew! while in his second year at CalArts. Following a name change, Cartoon Network featured the first Powerpuff Girls pilots in its animation showcase program What a Cartoon! in 1995[8] and 1996[9].

The series made its official debut as a Cartoon Cartoon on November 18, 1998[10], with the final episode airing on March 25, 2005.[11] A total of 78 episodes were aired in addition to two shorts, a Christmas special, a feature film, and a tenth anniversary special. Additionally, the series has been nominated for six Emmy Awards, nine Annie Awards, and a Kids' Choice Award during its run. Spin-off media include an anime, three CD soundtracks, a home video collection, and a series of video games, as well as various licensed merchandise.

After appearing on both the Rising Sun and Midnight Run, The Powerpuff Girls finally began airing on Cartoon Network's weekday afternoon Toonami block on June 3, 2002.[6] The series was also part of the Kids' WB! Toonami lineup.

The show centers on Blossom, Bubbles, and Buttercup, three kindergarten-aged girls with superpowers, as well as their "father", the brainy scientist Professor Utonium, who all live in the fictional city of Townsville, USA. The girls are frequently called upon by the town's mayor to help fight nearby criminals using their powers.

The plot of a typical episode is some humorous variation of standard superhero fare, with the girls using their powers to defend their town from villains and giant monsters. In addition, the girls have to deal with normal issues young children face, such as sibling rivalries, loose teeth, personal hygiene, going to school, bed wetting, or dependence on a security blanket.

As depicted in the opening sequence of each episode, the Powerpuff Girls were created by Professor Utonium in an attempt "to create the perfect little girls" using a mixture of "sugar, spice, and everything nice" (shown in respective fields of baby blue, light green, and pink). However, he accidentally spilled a mysterious substance called "Chemical X" into the mixture, creating, instead of the "perfect little girl", three girls (each possessing one of the above elements dominating her personality), and granting all three superpowers including flight, super strength, super speed, near invulnerability, x-ray vision, super senses, heat vision, and energy projection. In the original plot, the accidental substance was a can of "Whoop Ass", which was replaced by "Chemical X" in the aired version.

The three girls all have oval-shaped heads, abnormally large eyes (inspired by Margaret Keane's art), stubby arms and legs, and lack noses, ears, fingers, necks, and flat feet with toes (McCracken preferred them to look more symbolic of actual girls rather than going for a realistic look, meaning fewer details were added). They wear dresses with black stripes that match the colors of their eyes, as well as white stockings and black shoes. The closing theme to the cartoon offers a nutshell description of the three Powerpuff Girls' personalities: Blossom, commander and the leader. Bubbles, she is the joy and the laughter. Buttercup, she is the toughest fighter.

Blossom — The self-proclaimed leader of the Powerpuff Girls. Her personality ingredient is "everything nice", her signature color is pink, and she has long red hair with a red bow. She was named for having spoken freely and honestly to the Professor shortly after her creation as shown in the Powerpuff Girls Movie. She is often seen as the most level-headed, and composed member of the group and she is also strong and determined. Her unique power is freezing objects with her breath, as seen in the episode "Ice Sore".

Bubbles — The cute and sensitive one. Her personality ingredient is sugar, her signature color is blue, and she has short blonde hair in two pigtails. Bubbles is seen as kind and very sweet but she is also capable of extreme rage and can fight monsters just as well as her sisters can. Her best friend is a stuffed octopus doll she calls "Octi", and she also loves animals. She exhibits the ability to both understand foreign languages (Spanish, Japanese) and communicate with various animals (squirrels, cats, monsters), and her unique power is emitting supersonic waves with her voice.

Buttercup — The toughest of the three. Her personality ingredient is spice, her signature color is green, and she has short black hair in a flip. She is a tomboy, who loves to get dirty, fights hard, and plays rough, she does not plan and is all action. Buttercup is the only Powerpuff Girl without a unique super power (aside from being able to curl her tongue as shown in the episode "Nuthin' Special"). McCracken originally wanted to name the character "Bud" until a friend suggested the name Buttercup.

Professor Utonium — A brilliant scientist who works in his home in the suburbs of Townsville. A stereotypical scientist, his general attire is a white lab coat and black pants with pens tucked into the lab coat's breast pocket. The Professor once housed a chimpanzee named Jojo (later to become the girls' arch-enemy, Mojo Jojo) as a lab assistant who proved to be reckless and destructive. Jojo pushed the Professor while he was stirring his Perfect Girl concoction, causing him to accidentally break through a glass containing the mysterious "Chemical X" which spilled into the formula, thus creating the Powerpuff Girls. The Professor is a genius in many fields of science, having shown knowledge in fields such as physics, chemistry, and biology as well as being a skilled inventor (inventing things such as a giant bipedal Powerpuff mech called the DyNaMo and a super suit that allowed him to fight crime with the girls). Aside from his role as a scientist, he acts as parent in The Powerpuff Girls' lives (doing things a father would normally perform, like preparing their school lunches or cheering up his "daughters" when they've been hurt). Although the girls address him as "Professor", when discussing the Prof with others, they refer to him as "our dad" (and Bubbles called him "dad" when he had given her Octi as her birthday present). The Professor can be odd, silly, clumsy, easily manipulated and over-protective at times, but still retains his caring father figure image.

The Mayor of Townsville — Generally referred throughout only as "Mayor", although he is referred to as "Barney" by his wife in the episode "Boogie Frights". He is short and old with a fringe of white hair around a bald scalp, and a thick mustache. He wears a monocle over his left eye and a small top hat that floats just above his head. He also has a love for pickles. The Mayor is dimwitted but loves his city. The episode "Meat Fuzzy Lumpkins" featured a different Mayor who was younger and taller than the Mayor of the series.

Ms. Sara Bellum — The Mayor's very competent, statuesque, and redheaded right-hand assistant who often handles the things the Mayor cannot. She wears a red dress, and red high heel shoes for a secretary look. Her face is usually not revealed onscreen, but there have been exceptions to this in several episodes. In some cases, her face has been "shown", after having first been replaced by some alternate form (like in the episode "Monkey See, Doggie Do", where she was transformed into a dog, and in the episode "Something's a Ms.", where she was dressed like Sedusa and wore a Sedusa mask). In the 10th anniversary special of the show, "The Powerpuff Girls Rule!!!", half of her face (with hair still covering part of its right side) was actually shown for a fraction of a second. Most of the time when she is visible on screen, her face is either blocked by some obstruction, by her own hair, or by a camera position to omit everything from the neck up when her lower body is shown. This has sometimes led to her neck appearing abnormally long for a human. Other onscreen characters often claim that she is very beautiful, with the exception of the abrasive Talking Dog. She is named after the cerebellum, probably in reference to her job as the "brains" of the mayor's operation. She attended high school with Sedusa and Femme Fatale prior to the Powerpuff Girls' creation. She has also helped the girls defeat the Rowdyruff Boys in the episode "The Rowdyruff Boys", where she advised the girls to "instead of fighting, try being nice" (in other words, kiss them) to destroy them, which ended up working.

Ms. Keane — The kindergarten teacher of Pokey Oaks Kindergarten. She wears an orange shirt, red vest, brown pants, and has short black hair and light blue eyes. She is patient, understanding and very protective of her students, making her a well-liked, motherly figure. She, once, fell in love with the Professor and went on a date with him in the episode "Keen on Keane", but their passion was unfortunately short lived when the Professor found out that Ms. Keane had a cat, since he had a traumatic experience with one in a previous episode as it made him jump off a building. It should be noted that although Ms. Keane is a kindergarten teacher, she is also incredibly smart. This was shown in the episode "Speed Demon" when she, prior to the girls' time travel, actually tried to figure out how the speed of a person throwing an apple could make said apple travel faster than the speed of light and thus being able to travel though time and space. Soon realizing that she is confusing the children, she returns to her normal state, and excuses herself. Ms. Keane also forbids any fighting in school even if there's a crisis taking place within it thus she convinces the girls that there are other ways to solve problems other than fighting as demonstrated in the episode "Schoolhouse Rocked". 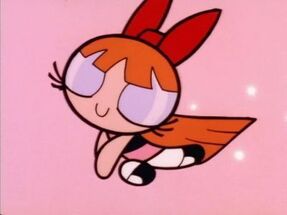 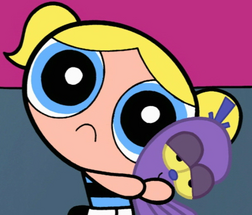 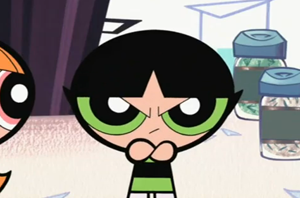 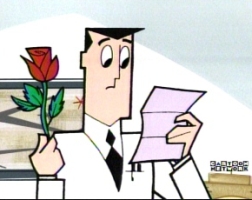 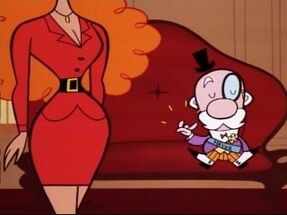 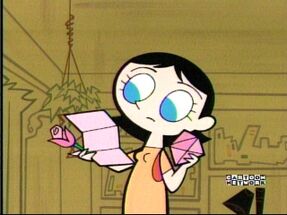 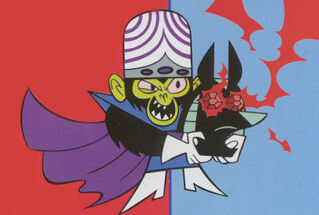 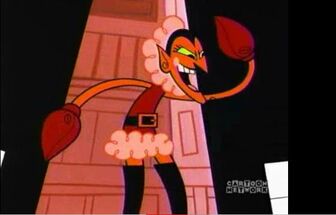 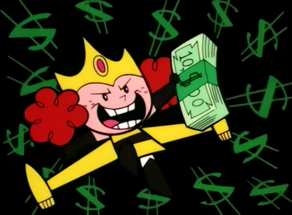 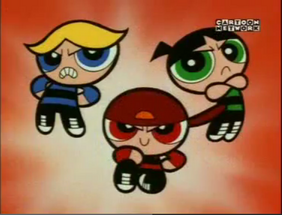 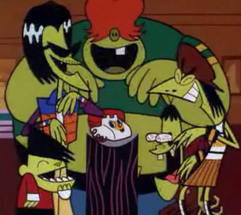 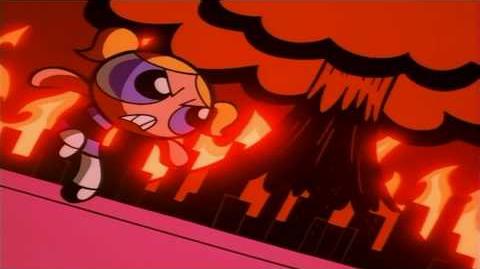 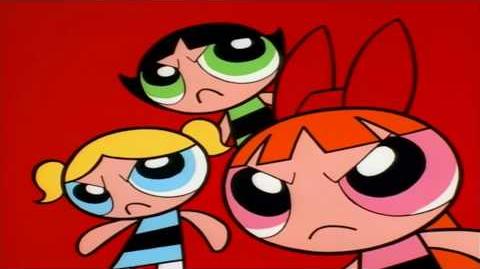 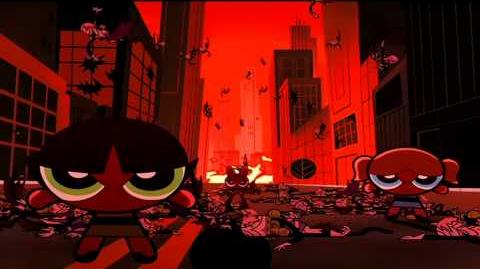 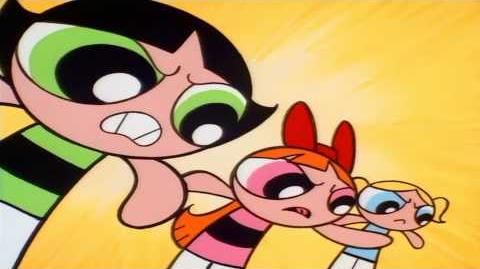 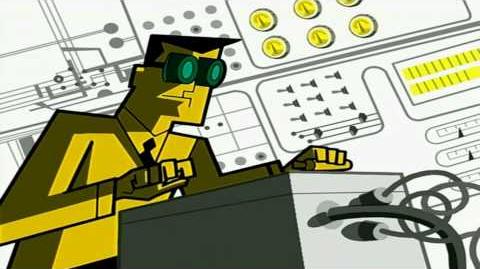 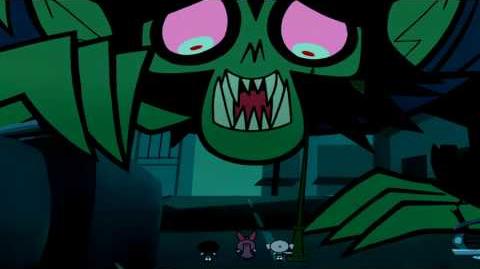 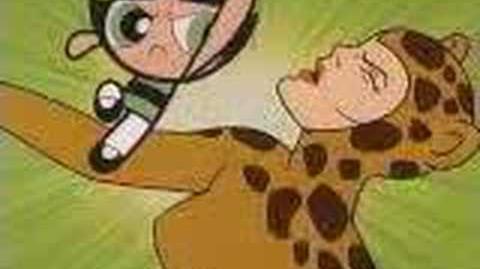 The series lasted 6 seasons with 78 episodes total ("See Me, Feel Me, Gnomey" was unaired). A Christmas special, a 10th anniversary special, and a feature length movie were also produced. Episodes of The Powerpuff Girls have seen numerous DVD and VHS releases, including "The Complete Series 10th Anniversary Collection", This six-disc release includes all 78 episodes from the series as well as a documentary with McCracken, the Whoopass Girls pilot, both What a Cartoon! shorts, music videos, series promos, the "'Twas the Fight Before Christmas" special, and the "Powerpuff Girls Rule!!!" special, and a panoramic poster designed by McCracken.

The Powerpuff Girls began as a student film titled Whoopass Stew, made by McCracken while he attended the California Institute of the Arts in 1992. Two additional shorts, "Meat Fuzzy Lumkins" and "Crime 101", later aired on Cartoon Network's What a Cartoon! (aka World Premiere Toons). The series officially premiered on November 18, 1998, with the final episode airing on March 25, 2005.

Due to each episode of the series consisting of two 11-minute segments, single segments were sometimes used by Toonami as time filler. Examples include when segments aired after the longer season finale episodes of Tenchi Muyo!, which run about 45-minutes, as well as certain movie presentations.

The Powerpuff Girls only had one marathon appearance during its run on Toonami, Toonami: Full Cycle.