26 (List of Episodes)
ThunderCats is an American/Japanese animated television series, produced by Ethan Spaulding and Michael Jelenic. A reboot of the original 1980's TV series with the same name (which ran from 1985 to 1989), Thundercats was developed by Warner Bros. Animation and Studio 4°C and combined elements of western animation with Japanese anime. Story-wise the series takes a much darker and more cinematic approach than the original show, featuring a lot more focus on characterization and more sophisticated themes.

The series premiered with an hour-long special on Cartoon Network on July 29, 2011, and received very positive reviews, with many praising the animation and storyline.[2] However, Thundercats was officially cancelled by Cartoon Network in 2013, after one 26 episode season.[3]

On the planet known as Third Earth, the cats have lived and thrived for generations in the kingdom of Thundera. However, one night the kingdom is attacked by the Lizard army, led by the evil sorcerer Mumm-Ra. With them, the lizards bring technology, a concept unfamiliar to the cats. Because of this, Thundera is destroyed, but a small band of surviving Thunderians, led by the young heir to the throne, Lion-O (who wields the powerful Sword of Omens), flee the destroyed city, in order to seek out the Book of Omens, which is said to have the knowledge needed to defeat Mumm-Ra. Once they find it, the ThunderCats realize that in order for them to defeat Mumm-Ra, they must unite all the different species living on Third Earth. The ThunderCats also find out that they have to find three stones of power which, if found by Mumm-Ra, will give him power to become the most powerful being in the universe.

Lion-O — The leader/current Lord of the ThunderCats. The biological son of King Claudus, Lion-O was a misunderstood teenager in Thundera, being the only one in the kingdom who believed that technology and Mumm-Ra existed. Because of his beliefs, many felt he was unworthy to become king, often favoring his adopted older brother, Tygra, for the position. After the fall of Thundera and the death of King Claudus, Lion-O becomes the new Lord of the ThunderCats, leading the team to find a way to defeat Mumm-Ra.

Even though Lion-O can be a bit of a hot-head, he's by far the most patient and understanding cat, even more than Cheetara. Lion-O also believes that the other races of Third Earth should be treated equally, as seen when Lion-O was defending two persecuted Lizards from some Thunderians and when he refused to give into Pumyra's dark temptation to steal the Tech Stone which would've resulted in the death's of the Avistan birds.

Tygra — The adopted older brother of Lion-O. Tygra was originally born to Javan, the leader of the Tiger Clan living in the mountains (the Tigers were exiled because of their continued loyalty to Mumm-Ra). During this time, the Tiger Clan was stricken with disease, and in order to survive, they made a deal with the Ancient Spirits of Evil. In return for saving their lives, the Ancient Spirits of Evil demanded that Tygra (who was just a baby at the time) be sacrificed because they considered him a bigger threat to their existence than Lion-O would be. Unable to kill his own son, Javan sent him away in a hot air balloon and Tygra was eventually found/adopted by the royal family of Thundera. Originally, Tygra was the crown prince of Thundera, but after Lion-O was born, Tygra couldn't succeed his adoptive parents as the ruler of Thundera (he's still a prince, but he's next in line for the throne after Lion-O). This would result in Tygra hating his brother for things beyond Lion-O's control, such as losing the crown (and their mother, who had died giving birth to Lion-O) and constantly working to show Lion-O wasn't worthy to succeed Claudus as the King of Thundera.

Tygra also possesses extreme xenophobia, a jealous streak, and a combo inferiority/superiority complex, all of which often cause friction between the two brothers and the rest of the team (although it's shown, at random times, that Tygra truly does care about Lion-O). Tygra also finds out that, in addition to being able to use firearms with the skill of a trained marksman without ever having seen such tech before, he is also a natural ace at flying, even though he has never seen such tech before, due to his ancestors of generations past being fighter pilots for Mumm-Ra.

Cheetara — Initially one of the last remaining cleric warriors. When she originally tried to join the Order of Clerics as a child, she was initially turned down by Jaga, because even though she had the speed possessed by clerics, she lacked the patience. Despite being turned down, Cheetara decided to show Jaga she had the patience needed to become a cleric, and began to wait in front of the Order's doors to prove her patience. Instead of keeping true to her word and proving herself patient, Cheetara cheated and used the petals of a flower given by Tygra to sustain herself. Jaga finally allowed her to join the Order after this.

In the aftermath of Thundera's downfall, Cheetara was possibly the sole surviving member of the Order, with the exception of Jaga, who lives on in spirit form in the Book of Omens. Cheetara initially served as a counselor to Lion-O, since she never shunned him for his interests in technology and initially seems to support his kindness to other races. Although, since being paired with Tygra, Cheetara's begun to adopt some of his more negative outlooks and habits, such as his opinions of the Lizards.

Panthro — One of King Claudus' most loyal soldiers. Panthro, along with his friend, Grune, were originally sent by Claudus to find the Book of Omens, but their attempted search resulted in Mumm-Ra's release and Grune betraying Panthro. While fighting Grune, Panthro fell down an abyss and was seemingly killed. However, Panthro survived and constructed the ThunderTank, which he later used to save Lion-O's group from Slithe's platoon in Song of the Petalars. Though he questioned Lion-O's ability to lead at first, feeling that he was too young to be the King, Panthro eventually accepted him as the new Lord of the ThunderCats. Unlike the other ThunderCats, Panthro never learned how to swim and is very aquaphobic.

WilyKit & WilyKat — Fraternal twin siblings who were originally from a middle-class family in the countryside, consisting of them, their parents, and younger brother and sister (also fraternal twins). After the twins lost their father to a tornado, the family began to become more down-trodden, with their mother trying to make ends meet (she wouldn't let her oldest kids help her). Eventually, the Wily-twins decided to run away to find the lost city of El Dara, so they could become rich and help their family. However, upon arriving to Thundera, the brother (WilyKat) and sister (WilyKit) were forced to become street urchins and pickpockets in order to survive the slums, with their aspirations being the only thing keeping them going. When the Lizards attacked Thundera, the two managed to escape during the chaos before eventually teaming up with Lion-O, Tygra, Cheetara and Snarf on their journey.

Snarf — A creature of, so far, unknown origin and species. Snarf was originally Lion-O's personal caretaker when the young king was a baby. Now that Lion-O's fully grown and can take care of himself, Snarf's more of a pet to the young lord. Snarf still cares very much about Lion-O and is very protective of him. Unlike the 80's series, this incarnation of Snarf cannot speak and has a lesser role which basically amounts to a pet.

Mumm-Ra — The main villain of the series. An eternal servant of the Ancient Spirits of Evil, Mumm-Ra is himself a Spirit of Evil, with the sole purpose of conquering the universe. Centuries prior to the series, Mumm-Ra used advanced technology and magic to enslave all the animals into serving him. With them under his command, he sought to gather the Four Powerstones, which, if attached to the Sword of Plun-Darr, would give him ultimate power. By managing to take the Warstone (which would later be known as the Eye of Thundera), the ThunderCat known as Leo (with help from the other animals) was able to defeat Mumm-Ra and strip him of the other Powerstones. But when Mumm-Ra's spacecraft was pulled into Third Earth's atmosphere, he entered his tomb to escape the crash and leave everyone else to die. However, the controls were damaged and Mumm-Ra was trapped within his own spacecraft, as the stones and survivors spread across Third Earth.

Many centuries later, Mumm-Ra manipulated Grune into releasing him, and was able to orchestrate Thundera's downfall. Now Mumm-Ra not only plans to obtain the Eye of Thundera, but also regain the other three Powerstones and the Sword of Plundarr while gathering some allies to assist him. 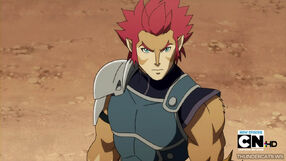 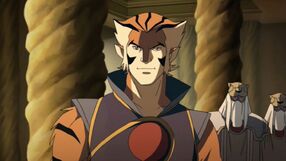 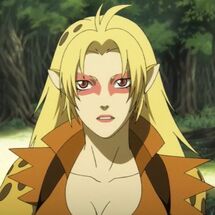 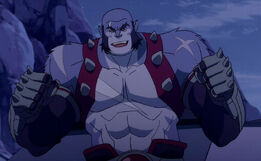 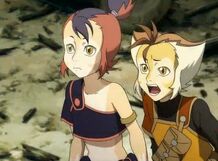 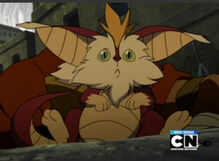 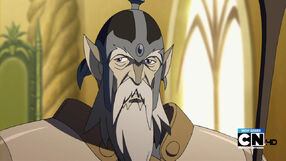 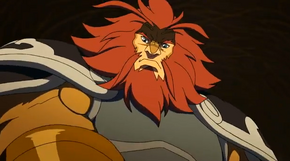 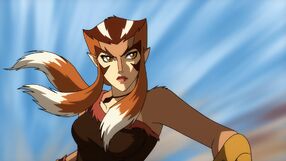 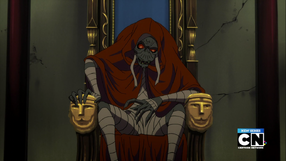 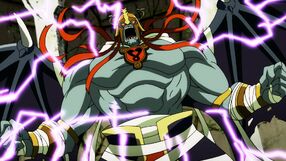 Mumm-Ra The Ever Living 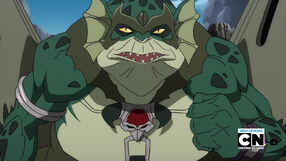 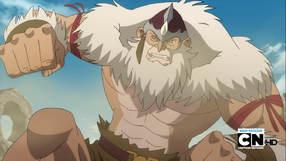 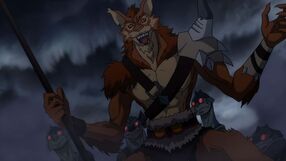 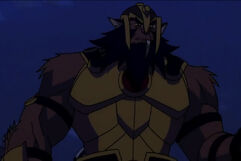 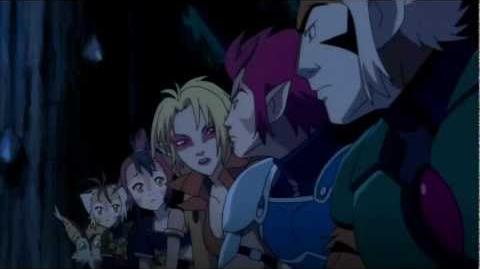 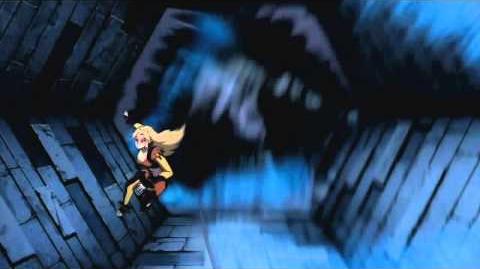 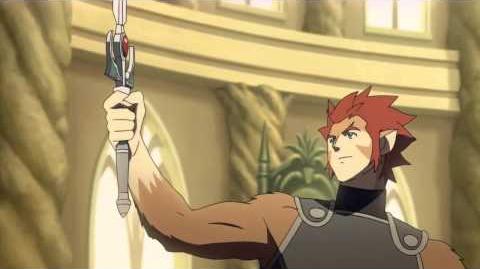 Reruns of ThunderCats were added to Adult Swim's Toonami programming block at 2:30 AM on October 6, 2012, when Toonami began to fill the entire six hour programming block without rerunning the first three hours from 3:00-6:00 AM.[1] Due to the end of daylight saving time on November 3, 2012, Toonami gained an extra hour of programming and ThunderCats moved to 1:30 AM. The following week, the lineup was reshuffled and ThunderCats remained at 1:30 AM. The series moved to the 1:00 AM time slot on December 15, 2012 but returned to 1:30 AM two months later on February 16, 2013.[5] The series was pre-empted for one week by Toonami's 16th anniversary presentation of Evangelion: 1.11 You Are (Not) Alone on March 16, 2013.[6] The final episode of the series made its Toonami premiere on April 6, 2013 and reruns began airing the following week (April 13th). Reruns of the series then moved to the 3:00 AM time slot on May 18, 2013 and were removed from the lineup following the July 20, 2013 broadcast.[7]