12:00 AM - 3:30 AM
Toonami: Dark Knights was a two week marathon of DC animated films featuring the character Batman, that aired on Adult Swim's Toonami programming block on August 15, 2020 and August 22, 2020 from 12:00 AM to 3:30 AM. Four total DC animated films aired during the two week marathon, two each week, pre-empting the entire regular Toonami schedule. Additionally, two Adult Swim original short films based on Rick & Morty aired on August 15th as time filler.[1]

The marathon was part of the build-up to the launch of the 24-hour DC FanDome virtual convention, which was held in response to most major conventions being cancelled due to the COVID-19 pandemic. The first part of DC FanDome titled "DC FanDome: Hall of Heroes" was made available on Saturday, August 22, 2020. 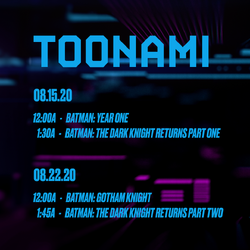