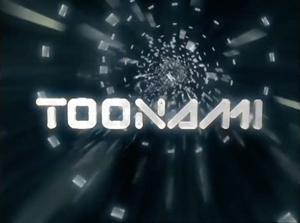 A Total Immersion Event, often shortened to simply T.I.E., is an animated adventure featuring the Toonami hosts TOM and SARA. However, the fourth T.I.E. did not feature them and instead featured a completely original story called IGPX. There were a total of four T.I.E.s during Toonami's original run on Cartoon Network, and 7 more have aired during its current run on Adult Swim. The Toonami Total Immersion Events have all been produced by Williams Street, the producers of Toonami, with animation coming from outside animation studios.

Total Immersion Events were created when Cartoon Network launched the "Total Immersion Cartoon initiative" in 2000. The first Total Immersion Cartoon event, Toonami: The Intruder, was a 5-part on-air story that aired during Cartoon Network's afternoon action-adventure block and was augmented by exclusive online content available at Toonami.com. The result was a huge success for Cartoon Network, posting considerable increases from the previous year in several key demographics, including a 50% increase in viewers ages 9-14. Toonami.com's traffic was up 72% from the previous week, with more than 4.5 million page views for the week.[1]

During Toonami's run on Cartoon Network, T.I.E.s were week-long 5-part miniseries with one 2-3 minute episode of the T.I.E. airing on the block each day, Monday through Friday, during a commercial break. The first four T.I.Es followed this model, although The Intruder had two additional episodes that aired at later dates. Additionally, each T.I.E. had a tie-in video game that was playable on toonami.com during the event. Each day viewers could watch the Toonami broadcast, gather game codes and then play the games to further the storyline of the T.I.E.

T.I.E.s returned to Toonami on Adult Swim in 2015 and the format shifted due to the block's new 1-night-a-week format. Instead of airing over one week, T.I.E.s now air over multiple weeks with one episode airing each week during a commercial break. The T.I.E.s aired on Adult Swim are also less interactive for viewers, as no tie-in games have been created for them.

In February 2021, the first non-canonical Toonami Total Immersion Event, Cosmo Samurai was created by Toshiyuki Tsuru and animated by Telecom. Unlike all previous T.I.E.s (except IGPX) which are animated in 3-D using CGI, Cosmo Samurai is animated in 2-D in an anime art style. Cosmo Samurai is non-canonical because the Toonami crew had little to no involvement in its creation. It features the Toonami characters (i.e. TOM and SARA) but does not impact the ongoing Toonami narrative or the characters themselves.