June 30, 2007[5][6][7][8]
Transformers: Cybertron, known in Japan originally as Transformers: Galaxy Force, is a Japanese anime series co-produced by Hasbro and Takara. The series premiered in Japan from January 8, 2005 to December 31, 2005 on TV Tokyo. The series aired in Japan as a separate rebooted Transformers series, but in America, the English dub was presented as a sequel to the previous series, Transformers: Armada and Transformers: Energon by adding dialogue and reusing a number of screens to link elements of the Armada and Energon series to the show, giving the impression that it is a sequel.

In the series, all of the Transformers are computer-generated, while the humans and backgrounds are rendered in traditional cel animation. It is the last series in the Transformers franchise to be produced in Japan.

Transformers: Cybertron premiered on Cartoon Network's Toonami block in July of 2005 for a short time until it was moved to Kids' WB. It then returned to Toonami in 2006 for another short stint.

When the destruction of Unicron results in the formation of a massive black hole, the planet Cybertron, home world of the Transformers, is threatened, and its population is evacuated to Earth, taking the forms of local vehicles and machinery to hide from humanity. As this occurs, Optimus Prime's elite team of Autobot warriors are approached by the ancient Transformer Vector Prime, who has emerged from his resting place in the void outside of time to inform them of the legendary Cyber Planet Keys, ancient artifacts of power which can stop the black hole and save the universe. Lost due to an accident during an attempt to create a cross-universal space bridge network, the Cyber Planet Keys now reside on four worlds somewhere in the universe - unfortunately, Vector Prime's map showing their location is stolen by Decepticon leader Megatron, and both forces relocate to Earth as the race to find them begins.On Earth, the Autobots befriend three human children named Coby, Bud and Lori, played by Sarah Edmondson, who aid them in locating the Omega Lock, the focusing device for the Cyber Planet Key's power.

The series features the entirety of planet Cybertron's civilization evacuating the planet to Earth when it is absorbed by a black hole left by the destruction of Unicron. The Autobots act as the main protagonists of the series, with the Decepticons as the main antagonists. Various characters originate from fictional planets shown throughout the series.

Originally, Cybertron was created in Japan as a separate standalone continuity called Transformers: Galaxy Force, but it was dubbed and edited into Cybertron. During the dub, most characters were renamed into new or previously established character to match with the continuity (e.g. Sideways, Hot Shot, etc.) Cybertron features a large cast of characters, something which has not been seen since the original 1980s cartoon. This show also features an incarnation of popular character Soundwave, again, not seen since the 1980s cartoon. 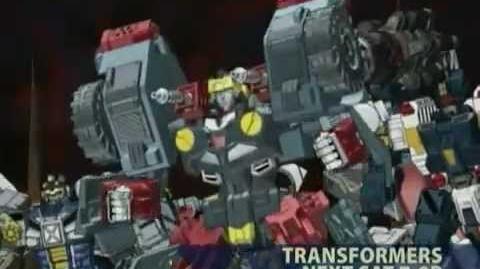 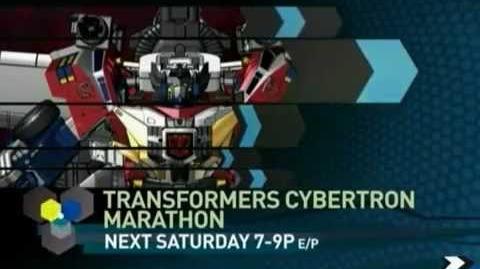 In the United States, Shout Factory! released the complete series on DVD on August 5, 2014.

Transformers: Cybertron aired in the United States on Cartoon Network's Toonami block from July 2, 2005[1] to September 17, 2005, when it was moved to Kids' WB.[2] It then returned to Toonami for a short stint from March 11, 2006[3] to April 15, 2006[4]. The series then moved outside of the Toonami block where the remainder of the new episodes aired. On June 30, 2007, the series returned to Toonami, for one night only, with a special 4 episode marathon to promote the new Transformers feature film.[5][6][7][8] The series also briefly aired on Toonami in the UK.