04 (List of Episodes)
Uzumaki (Spiral in Japanese) is a Japanese supernatural horror anime mini-series, based on the manga series of the same name written and illustrated by Junji Ito. On August 30, 2019, the 4-episode anime adaptation was announced at Crunchyroll Expo during the Junji Ito panel. The series is a co-production between Adult Swim and Production I.G USA. The series is animated by Drive and directed by Hiroshi Nagahama, with Colin Stetson composing the music. It will premiere on Adult Swim's Toonami programming block in October 2022 before it airs in Japan.[1][2]

The manga series appeared as a serial in the weekly manga magazine "Big Comic Spirits" from 1998 to 1999. In North America, Viz Media serialized an English-language translation of the manga series in its monthly magazine Pulp from February 2001 to August 2002. The manga also inspired a live-action horror film starring Eriko Hatsune and Fan Fhi in 2000.[2]

Kirie lives in a town that lately has odd occurrences, and each one somehow is connected to a spiral. Soon the spiral occurrences spread to infect even the bodies of people, which suddenly turns the everyday events in her life into chaos and horror.

Kirie Goshima — Kirie is the narrator and main protagonist of Uzumaki. She is a student at Kurôzu High in the Japanese town of Kurōzu-cho. She is dating Shuichi Saito. Throughout the series she becomes a recurring target of the spiral curse.

Shuichi Saito — Shuuichi is Kirie's boyfriend, the son of Yukie and Mr. Saito, and the deuteragonist of the series. He is generally shy and seems generally depressed about his life. At the beginning of the series he asks Kirie to run away with him because he senses that something is wrong with the town.

Mr. Saito — Mr. Saito is the father of Shuichi, his name is never revealed in the manga series but he is named Toshio in the movie adaptation. In the beginning of the series, Toshio becomes obsessed with spiral patterns eventually leading him to lose control. Ultimately, he dies by breaking his bones while trying to curl his entire body into a spiral.

Yukie Saito — Yukie is the mother of Shuichi. She becomes concerned with her husband's obsession and tries to get Mr. Saito professional help so that he might get better and be able to return to work. After her husband's death, she develops a paranoia about spirals and attempts to avoid them by doing things such as cutting her hair and cutting off her fingertips. 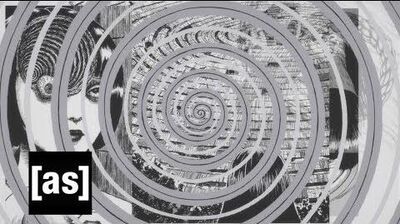 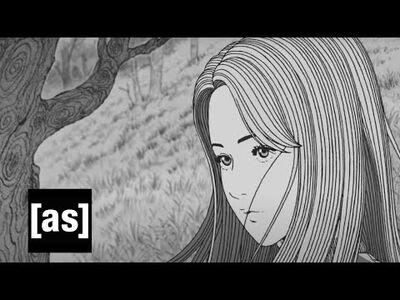