12:00 AM
Wonder Woman: Bloodlines is an American animated film produced by Warner Bros. Animation and DC Entertainment, written by Mairghread Scott, and produced by Sam Liu and Justin Copeland. The film was released on digital platforms on October 5, 2019 and on 4K Ultra HD and Blu-ray on October 22, 2019. The film premiered at San Diego Comic Con the same day it was released, October 5, 2019.

The film premiered on Adult Swim's Toonami programming block on December 19, 2020 at 12:00 AM, during Toonami’s night of Wonder Woman.[1]

In 2014, Princess Diana of Themyscira rescues US pilot Captain Steve Trevor from a Parademonattack. Diana treats Steve with a purple healing ray before he is taken prisoner by Diana’s mother Queen Hippolyta due to Diana breaking the island’s “no men law”. However, Diana breaks Steve out and sees an omen about an otherworldly invasion facilitated by his arrival. When Hippolyta demands Steve’s re-incarceration, Diana defies her before leaving to protect man’s world, prompting Hippolyta to disown her own daughter. Diana and Steve arrive in Washington, D.C. where Etta Candy takes them to geologist Julia Kapatelis. While there, Diana meets Julia’s daughter Vanessa, who grows jealous of Diana when her mother spends more time with Diana than her. Diana decides to stay in man’s world and protect it as the superheroine “Wonder Woman”. Five years later, Julia requests help from Diana and Steve to find Vanessa, who has stolen an artifact from her superior Veronica Cale and plans to trade it with the villainous Doctor Poison. Diana, Steve and Julia intervene but are confronted by Poison’s soldiers led by Giganta, who injects herself with an enchantment serum, but is ultimately defeated. During the battle, however, Julia is fatally shot in a crossfire as Poison escapes with the artifact. Vanessa blames Diana for her mother’s death before fleeing.

While visiting her mother’s grave, Vanessa is recruited by Doctor Poison and Doctor Cyber, who transform Vanessa into Silver Swan. Meanwhile, Diana and Steve locate Poison in Qurac. The two travel there using a stealth jet provided by Etta. Upon arrival, they are attacked by Silver, who Diana realises is Vanessa and is defeated while Poison escapes with a prototype bioweapon. Diana and Steve take the unconscious Vanessa to Cale Pharmaceuticals. While there, Diana believes the purple healing ray can reverse Vanessa’s transformation, but doesn’t remember the location of Themyscira due to a mystic block. Cale reveals to Diana and Steve she has been researching the island as a side project and informs Diana that she must drink water from a fountain located at the temple of Pasiphaë to regain her knowledge of the location.

While in the temple, Diana and Steve are suddenly confronted by Cheetah, who is now part of a team of supervillains called Villainy Inc. led by Poison and Cyber, who has also injected herself with a serum similar to Giganta’s. Steve and Etta enter the maze in the temple where they encounter and defeat a Minotaur. Diana subdues Cheetah and reunites with Steve and Etta. They arrive at the Fountain as Diana drinks its water and finally regains her memory. Diana also realises that the Minotaur was enchanted to defend the fountain, which Diana destroys. After doing so, the Minotaur is set free and is named “Ferdinand” by Steve.

The trio make it back to Cale Pharmaceuticals where they pinpoint Themyscira’s location. However, they are interrupted by Cyber who reveals her true plans are to profit off the Amazons’ technology. Cyber reactivates Vanessa to attack Diana while the others escape. Eventually, Diana defeats Vanessa and manages to let her friends escape as Vanessa flees. With the new information they’ve received, Diana and Steve return to Themyscira only to find it already under siege by Villany Inc. Vanessa distracts the heroes as Cyber and Poison unleash their endgame weapon Medusa. Medusa refuses to be under the command of Cyber so she destroys Cyber’s automation. Poison offers Medusa the enhancement serum but it fails, so Medusa takes the serum herself. Medusa grows more powerful and begins killing several Amazonians. Diana heads to confront Medusa. Diana uses Medusa’s venom to blind herself, allowing her to meet Medusa head-on. Despite Diana’s efforts, Medusa batters her on the ground but is saved by Vanessa, who is inspired by Diana’s self sacrifice. Together, Diana and Vanessa kill Medusa. In the aftermath, Vanessa and Hippolyta reconcile with Diana. Hippolyta presents Diana as the champion of Themyscira and decides to allow the public into Themyscira.

In a mid-credits scene, Diana returns to Washington where she confronts Cale. Cale reveals herself to be the true mastermind behind Villainy Inc. and swears her revenge on Diana after foiling her plans. 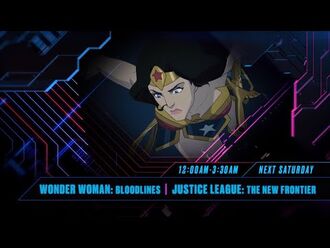