Ongoing (List of Episodes)
Yashahime: Princess Half-Demon is a Japanese anime series produced by Sunrise and directed by Teruo Sato with main character designs by InuYasha original creator Rumiko Takahashi. It is a sequel to InuYasha and InuYasha: The Final Act. The first season aired in Japan on Yomiuri TV (YTV) and Nippon TV (NTV) from October 3, 2020 to March 20, 2021 and a second season titled Yashahime: Princess Half-Demon: The Second Act began airing on October 2, 2021.[3]

Viz Media licensed the series in North America and an English dub was created in association with Funimation, with the original English cast of InuYasha reprising their roles. The English dub of the first season premiered in the United States on Adult Swim's Toonami programming block from June 26, 2021 to January 1, 2022.[1][2]

Several years after the events of InuYasha, Sesshomaru and Rin's daughter four-year-old Towa is separated from her twin sister Setsuna and gets stranded in the modern era, where she is adopted into her aunt Kagome Higurashi's family, raised by her younger brother Sota and his wife Moe.

One decade later, Towa is reunited with Setsuna, who came to the modern era through the vast power of the Sacred Tree of Ages. During their separation, Setsuna became a hardhearted demon-slayer working under Kohaku and does not remember her past as they and her dreams were stolen by the mythical Dream Butterfly. In order to restore them, the half-demon twins embark on an adventure while accompanied by their quarter-demon bounty hunter cousin Moroha, who is the feisty, hard-as-nails teenage daughter of Inuyasha and Kagome Higurashi, and also has no memory of her parents.

The spirit of the Sacred Tree of Ages reveals itself to the cousins, warning them that an old rival of their paternal dog-demon grandfather is planning on warping time since Sesshomaru refuses to fight him. At the same time, it is holding Rin in stasis for Sesshomaru because of her unusual connection to Lady Zero, the elder sister of Lord Kirinmaru, and creator of the seven mystical Rainbow Pearls, whose respective demonic powers equal those of the Shikon Jewel.

Towa Higurashi — Sesshōmaru and Rin's eldest daughter and Setsuna's older twin sister. She was somehow transported to the modern era through the power of the Sacred Tree of Ages and the Bone Eater's Well when she was just four years old. She received shelter from the Higurashi family, and was subsequently raised by her half-uncle-in-law, Sōta Higurashi. She is reunited with her sister Setsuna after spending ten years in modern times. She is a half-demon and wields the sword Kikujūmonji and carries the Silver Rainbow Pearl inside her left eye. When her sword is broken, she is capable of unleashing her demonic power to form her demonic energy into the remaining blade. Later she learns to absorb the demonic energy of enemies to empower herself and becomes capable of unleashing her father's "Sōryūha" attack.

Setsuna — Sesshōmaru and Rin's youngest daughter and Towa's younger twin sister. She was separated from her older twin sister Towa when they were both four years old but was reunited with her after traveling to the future with her cousin Moroha. After her sister's disappearance she became a demon slayer who works under Kohaku. She seems to have difficulty believing Towa is really her sister, given that she lost all memories of her past due to the influence of a Dream Butterfly, which also rendered her unable to sleep or have dreams. She holds the Gold Rainbow Pearl inside her right eye and wields the Naginata Kanemitsu no Tomoe, using the attacks "Cyclone Burst" and "Scourge of Swallows". She is a half-demon and her demonic blood can produce a powerful poison that is hard to control and she has it sealed by Miroku to contain it better.

Moroha — The fourteen-year-old daughter and only child of Inuyasha and Kagome Higurashi, a three-quarters human and quarter-demon bounty hunter known as "Moroha the Demon Killer" who slays demons and sells their parts to other demon slayers, presumably so they can make weapons and armor out of them. Aside from being capable of using her father's claw attacks and exorcising demons like her mother, she wields the yōkai sword Kurikaramaru and carries the Red Rainbow Pearl with her, which she stole from the demon Tokotsu's corpse. Tragically, Moroha knows very little of her parents as they sent her away for her own safety when she was an infant. 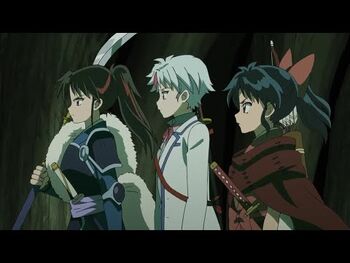 The first season aired in Japan on Yomiuri TV (YTV) and Nippon TV (NTV) from October 3, 2020 to March 20, 2021 and a second season titled Yashahime: Princess Half-Demon: The Second Act began airing on October 2, 2021.[3] In North America, Viz Media streamed the series with subtitles on Crunchyroll, Funimation and Hulu, while the English dub began streaming on November 6, 2020 on Funimation, Hulu and Crunchyroll.

The English dub of the first season aired in the United States on Adult Swim's Toonami programming block from June 26, 2021 to January 1, 2022.

The English dub of the first season premiered in the United States on Adult Swim's Toonami programming block on June 26, 2021 at 1:00 AM, replacing The Promised Neverland in the lineup.[1] Following the conclusion of the fifth season of My Hero Academia, an extra airing of Yashahime was added to 12:30 AM on November 20, 2021. The season finale was set to air December 11, 2021 with three episodes; however, due to an error, episode 21 was mistakenly shown when the finale was supposed to air.[4] The episode was rescheduled to air January 1, 2022 at 12:30 AM.[2] After the season finale aired, the series was pulled from the lineup.