180
Yu-Gi-Oh! GX, known in Japan as Yu-Gi-Oh! Duel Monsters GX is an anime spin-off and sequel of the original Yu-Gi-Oh! series. GX is produced by Studio Gallop, and directed by Hatsuki Tsuji, with music arrangements by Yutaka Minobe. The series originally aired in Japan on TV Tokyo between October 6, 2004 and March 26, 2008, and was succeeded by Yu-Gi-Oh! 5D's.

The "GX" in the series' title is short for the term "Generation neXt". "GENEX" was conceived as the series' original title, as can be evidenced in early promotional artwork. It also refers to the GX tournament that takes place between episodes 84 and 104.

Ten years after the original Yu-Gi-Oh! series, Yu-Gi-Oh! GX follows a young boy named Jaden Yuki who, along with his friends, attends Duel Academy, a special institute founded by Seto Kaiba, in the hopes of becoming the next King of Games. Using his Elemental Hero deck and a Winged Kuriboh given to him by Yugi Moto, Jaden faces various challenges against other students, teachers and other mysterious beings.

Supporting characters often have connections to the educative or professional dueling worlds, and include Obelisk Blue professor Vellian Crowler, duelist-turned-Industrial Illusions designer Chumley Huffington, and professional duelists Zane Truesdale and Aster Phoenix. A group of foreign duelist champions, consisting of Jesse Anderson, Axel Brodie, Adrian Gecko, and Jim Crocodile Cook, along with the new professor, Thelonius Viper, would also find a place in Duel Academy's student body in the third year. The vast majority of said characters are either friends, rivals or enemies of Jaden Yuki, who seems to attract both friendship and trouble.

Antagonists of the series range from elderly Kagemaru and the enslaved Shadow Riders, the manipulative Sartorius, the deranged Duel Monster Spirit Yubel and the terrifying Nightshroud. 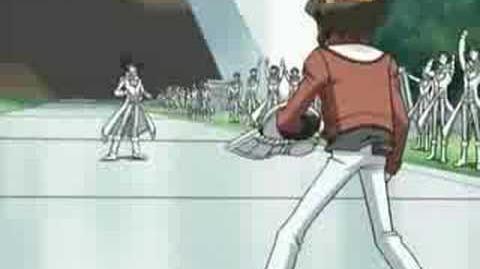 Like previous 4Kids adaptations, several changes were made from the original Japanese version, including the names and personalities of characters, the soundtrack, the appearance of visuals such as Life Point counters, and the appearance of cards. The story and some of the visuals are also edited to remove references to death, blood, violence and religion in order to make the series suitable for a younger audience. These edits are also used in various localizations of the show in countries outside of Asia where 4Kids had distribution rights. The fourth season has not been dubbed, as it was replaced by the North American airing of Yu-Gi-Oh! 5D's in September 2008.

Only the first 52 episodes of the series have been released on DVD in the United States. The release in America was the 4Kids Entertainment dubbed version that was aired on American television on Cartoon Network, 4KidsTV, and on Canadian television on YTV. It is released by Funimation Entertainment.

Yu-Gi-Oh! GX aired in Japan on TV Tokyo between October 6, 2004 and March 26, 2008. It was subsequently licensed by 4Kids Entertainment and adapted into English. The series was picked up by Cartoon Network and 4Kids TV in North America. The series aired in Canada on YTV from September 9, 2005[3] to November 3, 2006[4]. In the United States, the series aired on Cartoon Network from October 10, 2005[5][6] to November 3, 2007[7], mostly appearing in the Miguzi programming block. The series also appeared on Cartoon Network's Toonami block from October 28, 2006[1] to August 4, 2007[2]. Beginning on September 1, 2007, the series moved to Cartoon Network's Saturday morning block Dynamite Action Squad and new episodes continued to air through November. Meanwhile, reruns of the series also began airing on Fox's 4KidsTV programming block on September 1, 2007 before moving to The CW's version of the 4KidsTV block.[8][9]

Dubbed episodes were available on 4Kids' YouTube page until March 29, 2011, when Nihon Ad Systems and TV Tokyo sued 4Kids and terminated the licensing agreement for the Yu-Gi-Oh! franchise.

Yu-Gi-Oh! GX premiered on Cartoon Network's Toonami programming block on October 28, 2006 at 7:30 PM, with episode 78: "Mirror, Mirror (Part 1)", replacing an airing of Pokémon Chronicles in the lineup.[1] The series' Toonami run picked up where it left off on Miguzi, with premiere episodes of season 2 airing weekly until the series returned to Miguzi and overtook the Toonami airings on January 31, 2007. The final new episode of season 2 to premiere on Toonami was episode 88: "Blinded by the Light, Part 2" on January 20th, during the two hour Yu-Gi-Oh! GX Marathon. Toonami then continued to air "new to Toonami" reruns of the series through February 24, 2007.

The series was pre-empted for the entire month of March by Toonami's 10 Year Anniversary movie presentations. It then returned to Toonami in the 7:30 PM time slot on April 7, 2007, but skipped the remaining unaired episodes of season two and began airing premiere episodes of season 3 until Yu-Gi-Oh! GX was removed from the lineup following the August 4, 2007 broadcast. It was subsequently replaced in the lineup by Teen Titans. The final episode aired on Toonami was episode 116: "Trapper Keeper (Part 2)".[2]

Yu-Gi-Oh! GX only had one marathon appearance during its run on Toonami, the Yu-Gi-Oh! GX Marathon on January 20, 2007.