Yu-Gi-Oh! The Movie: Pyramid of Light

Yu-Gi-Oh! The Movie: Pyramid of Light

The film was released in the United States before Japan, as it was commissioned by 4Kids Entertainment, and was released to theaters on August 13, 2004. The characters are the same as the English release of the Yu-Gi-Oh! television series and their names retain their regional changes (i.e., Téa is Anzu in the Japanese version and Téa in all other versions). The film grossed $19,765,868 in the United States and Canada, and only $29,170,410 worldwide, making it a severe disappointment compared to the first three Pokemon films dubbed by the same company, which were highly successful, with a total worldwide gross of $363 million.

Unlike the TV series, the cards retain their real world (Yu-Gi-Oh! card game) appearance in the English version. The film was released in Japan on November 3, 2004 and aired on TV Tokyo on January 2, 2005, which utilized the names, original sound effects and original soundtrack from the Japanese anime and featured ten minutes of additional animation.

5,000 years ago, Pharaoh Atem killed and imprisoned Anubis after he tried to destroy the world using the forbidden Shadow Games. In the present day, Anubis' tomb is uncovered by archaeologists, complete with his most valuable treasure, the Pyramid of Light. At the same time, Yugi Muto completes Atem's Millennium Puzzle, causing Anubis to awaken from his eternal slumber and begin his return from the dead. Sharing his body with Atem's soul under the alias of Yami Yugi, Yugi goes on to become the King of Games, the world's greatest player of the trading card game Duel Monsters, by defeating his rival Seto Kaiba and obtaining the three powerful Egyptian God cards. Desperate to defeat Yugi, Kaiba turns to Maximillion Pegasus, creator of Duel Monsters, to gain any new cards designed to defeat the God cards. Kaiba and Pegasus duel with Kaiba winning and taking two cards, although Pegasus claims he only created one.

Yugi and Téa Gardner go to the local museum where Anubis' corpse and the Pyramid of Light are on display, meeting up with Yugi's Grandpa Solomon, who reads a prophecy describing a clairvoyant eye which will prevent the world's destruction if blinded. Anubis' spirit attacks the group with Yugi having a vision of the Lord of the Dead manipulating Kaiba and him a Shadow Game death match. He awakens to find Anubis and the Pyramid of Light missing, and races to warn Kaiba, taken to his duel dome by Kaiba's little brother Mokuba with friends Joey Wheeler and Tristan Taylor in pursuit. Kaiba arrogantly and ignorantly forces Yami Yugi into a duel, unaware that Anubis is manipulating him into using one of the two new cards, Pyramid of Light, which covers the field in a huge replica of the actual pyramid and destroys the God Cards. Yugi, Joey and Tristan are sucked into the pyramid whilst Mokuba flees the crumbling building.

Yugi, Joey, and Tristan awaken within the Millennium Puzzle, finding Anubis' tomb within. The regenerating sorcerer reveals that his monsters will destroy the modern world. Yami Yugi and Kaiba continue their duel, each blow to their in-game Life Points actually draining away their physical energy. To make matters worse, Kaiba manages to eliminate half of Yami Yugi's deck through Deck Destruction Virus, leaving him with barely any cards. Kaiba uses the second new card, the Blue-Eyes Shining Dragon, to destroy Yami's last monster and dropping his Life Points to 200. Téa, Solomon, and Mokuba escape the collapsing dome in Pegasus' helicopter, Pegasus having figured out what was going on. Téa's soul is sent into the Millennium Puzzle to aid Yugi, Joey and Tristan. Yugi finds the Dagger of Fate within Anubis' tomb, and uses it to destroy the all-seeing eye in the tomb as per the prophecy.

Anubis materializes behind Kaiba as he tries to alter the duel's path, casting him aside and taking command of the duel. Yami, reunited with Yugi, destroys the Pyramid of Light card with the Blue-Eyes Shining Dragon and then uses Kaiba's planned strategy to summon the God Cards and end the duel by destroying Anubis. However, Anubis rises again as a demonic beast and transforms the Duel Monsters cards into real creatures. This proves to be his undoing when Yugi and Yami summon the Blue-Eyes Shining Dragon to destroy Anubis. Kaiba departs promising to defeat Yugi, while Yugi thanks Yami and his friends for their help and companionship. 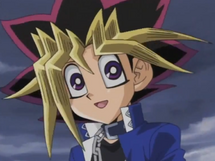 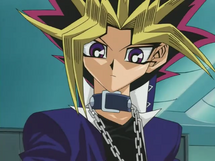 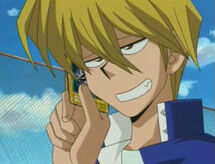 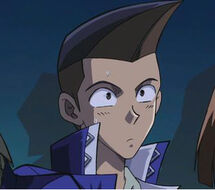 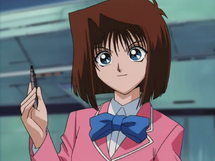 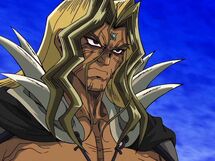 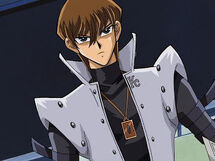 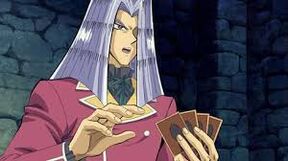 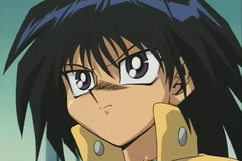 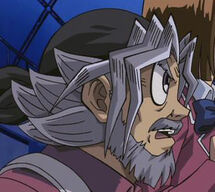 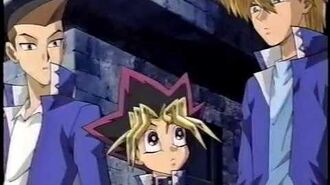